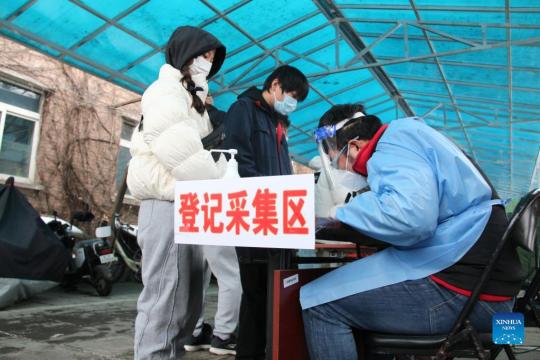 A COVID-19 outbreak in Beijing is controllable because the source of the Delta strain involved has been identified and the transmission chain is basically clear, a senior disease control and prevention official from the Chinese capital said on Monday.

All the patients and asymptomatic carriers have been linked to goods or people from three cold storage operations in the capital's Fengtai and Fangshan districts, Pang Xinghuo, deputy director of the Beijing Municipal Center for Disease Control and Prevention, told a news conference, with all the patients detected later coming from quarantine sites and areas in lockdown.

She said Beijing had reported seven confirmed locally transmitted COVID-19 cases, plus two asymptomatic carriers, in the 24 hours to 4 pm on Monday.

By then, the city had reported 52 COVID-19 infections since Jan 15, including six confirmed cases of the Omicron variant and 35 confirmed Delta patients, plus another 11 asymptomatic Delta carriers.

"All the Omicron patients have only mild symptoms," Pang said, adding that no new Omicron cases were reported on Monday.

Pang also urged residents to go out less, avoid parties and gatherings and seek medical help immediately when they have symptoms.

Beijing now has one high-risk area in Fengtai district, plus four medium-risk ones－three in Fengtai and one in Fangshan.

Fengtai will launch a second round of district-wide nucleic acid testing on Tuesday, said Bo Lan, the district's deputy head.

She said all the nucleic acid test results had been negative by 1 pm Monday in the first round of testing.

"More than 1.55 million residents in Fengtai have had their samples collected in this round of nucleic acid testing, which began at 6 am on Sunday," Bo said.

She said the district government will spare no effort to ensure supplies of food and Spring Festival products in its locked down areas and will offer psychological counseling to people in quarantine venues and locked down housing estates.

"Fengtai district now has 10 designated hotels for centralized isolation and a total of 1,316 people are now being quarantined or put under further medical observation," Bo added.

Meanwhile in Xi'an, Shaanxi province, work and production have resumed after all areas of the city were designated as low risk on Monday.

In addition to being allowed to leave the city for other areas if they have green health codes, all residents can now go in and out of local communities and villages when they wear face masks, have their body temperatures measured and show their health codes, it said.