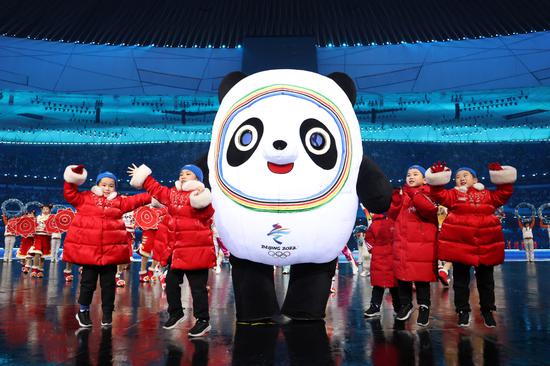 The Beijing 2022 opening ceremony rehearsal was conducted at the National Stadium, or the "Bird Nest," on Jan 22, 2022. About 4,000 participants were involved in the all-factor rehearsal, preparing for the opening ceremony to be held on February 4. (Photo/Xinhua)

A rehearsal of the Beijing 2022 opening ceremony took place at the National Stadium as fireworks lit up the sky on Saturday night, during which a warm-up activity preformed by Chinese square dancers in about 30 minutes was particularly eye-catching.

The opening ceremony of Beijing 2022 will start at 8 pm on February 4. Before that, a warm-up performance will be presented by square dancers aging from five to over 70 years old, expressing their excitement for the Olympic Winter Games, according to chief director Zhang Yimou.

Zhang, who is set to become the first man to direct both Summer and Winter Games ceremonies, told Xinhua that the warm-up will not have hosts or celebrity performers and ordinary people will stand at the center of the stage.

"Square dancing is popular in every city of the country. People only go singing and dancing when they live a happy life, so I think it's a good form of performance," Zhang said.

The square dancers consist of children, pupils, middle school and college students, adults and also the elderly, most of which come from Beijing and north China's Hebei Province. Ordinary people of various age groups can show themselves on this international stage, celebrating the Olympics as well as the Chinese New Year.

Meng Yan, director of the warm-up performance, said the square dancing before the opening ceremony aims to show the passion and hospitality of Chinese people joining together for a shared future.

In line with Beijing's efforts to stage a "simple, safe and splendid" Games, there will not be large-scale performance that stretch for a long time. The number of performers is cut from about 15,000 in 2008 to 3,000, with length shortened to about 100 minutes due to cold weather and the COVID-19 pandemic, Zhang said.

Zhang and his team have been preparing for the opening ceremony together with the performers over the past two and a half years.

During the Games, no other events will take place in the "Bird Nest" besides the opening and closing ceremonies of the Olympics and Paralympics, providing more time for Zhang and his team to make preparations in the venue.

About 14 years have passed since Beijing 2008 opening ceremony was held at the "Bird Nest," the stadium has been upgraded with new technologies.

"We came up with the idea of tracking performers' movements and presenting them on the ground screen in 2008, but it was not technologically feasible back then. Now we can make it," Zhang noted.

"As the opening day is approaching, every second counts. We need to identify and overcome small or potential problems to make sure that our staff, performers and facilities are ready for the ceremony," he said.