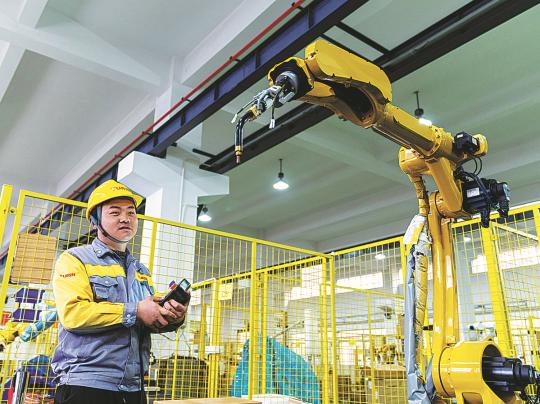 An employee runs checks on a robot at a facility in Hai'an, Jiangsu province. （Photo by Zhai Huiyong/For China Daily）

Effective investment is expected to play a more important role this year as challenges in growth continue to mount, and new investment models may inject new impetus for economic expansion, industry experts said.

Less than a week ago, an executive meeting of the State Council, China's Cabinet, urged an acceleration of investment in some 102 key national projects and in bolstering domestic consumption to help stabilize growth.

A statement on the government website released after the meeting noted that "the economy is at a crucial juncture of overcoming difficulties". The meeting called for firm implementation of the strategy of expanding domestic investment with a prerequisite of not flooding the economy with too much stimulus.

Zhang Bin, a senior fellow at the Institute of World Economics and Politics at the Chinese Academy of Social Sciences, said his understanding of the statement is that the economy is confronted by downward pressure and challenges in making corresponding policy options.

"The Chinese economy is in the middle of a critical transition toward consumption upgrade and industrial transformation. Traditional drivers are being phased out while new growth drivers are still yet to be fully nurtured," Zhang said, adding the external environment faced by the Chinese economy has also changed.

"Investment brews changes, and is the birthplace for new growth drivers," he said. "In China, the room for infrastructure investment, old and new, is still quite large. Standards of making effective investment should include both financial and social returns."

In the past few weeks, several provinces have kick-started their key investment projects for the year. Ning Jizhe, head of the NBS, said in a news briefing on Monday that "some front-loaded investment policies are already making an impact to facilitate infrastructure investment".

"The intensity of fiscal policy as well as monetary ones facilitating investment is increasing, and this will bolster the steady recovery in fixed asset investment," Ning said.

The newly started infrastructure projects add to the good prospects for investment growth this year, he added.

Many of the new projects are clustered in new infrastructure, with more active participation of local governments and private investors, which was applauded by experts, saying that the public-private partnership will play a bigger role this year.

In the first 11 months of 2021, investment in some 478 public-private partnership projects that have started construction reached 890.2 billion yuan ($139.09 billion), up 3.6 percent year-on-year, said the China Public Private Partnership Center under the Ministry of Finance.

Jia Kang, head of the China Academy of New Supply-Side Economics, said given the context in which expanding domestic demand was further underlined and "front-loaded" policies were urged, the role of PPP will become more critical in stabilizing growth and boosting new infrastructure investment this year.

"An ideal implementation of PPP requires improvement on governance capacity to bring forward a good partnership between the government and leading private enterprises, and such improvement is crucial for China's high-quality growth," Jia said.

"However, contracts between the two sides must be lawfully respected. Local governments must not willfully violate contracts. The interests of private businesses must be fully protected to make such partnerships sustainable," Jia added.