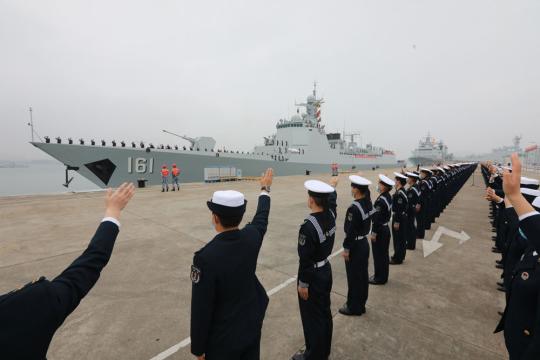 Military personnel wave goodbye to a fleet of the Chinese People's Liberation Army Navy at a military port in Zhanjiang, Guangdong province, on Saturday. The fleet will conduct an escort mission in the Gulf of Aden and the waters off Somalia. (Photo/Xinhua)

The 40th escort fleet of the People's Liberation Army Navy set out on Saturday from a naval port in Zhanjiang, Guangdong province, to protect civilian ships in the Gulf of Aden and the waters off Somalia.

The fleet has three vessels－the CNS Hohhot, CNS Yueyang and CNS Luomahu－carrying more than 700 officers, sailors and special force soldiers, according to a statement from the PLA Navy.

The Hohhot is a guided missile destroyer, of the Type 052D class, the second most powerful type of destroyer in the PLA Navy. The Yueyang is a Type 054A guided missile frigate, and the Luomahu is a Type 903A supply ship. They are part of the South Sea Fleet.

The Gulf of Aden waterway is part of the important Suez Canal shipping route between the Mediterranean and the Arabian seas through which many thousands of ships cross each year. In the late 2000s, the gulf evolved into a hub of pirate activity, substantially disrupting global maritime trade.

The Chinese government sent a task force to escort ships in the Gulf of Aden at the end of 2008, after a year in which more than 250 Chinese civilian ships, mostly cargo vessels and chemical tankers, were attacked or hijacked and about 50 Chinese seafarers were taken hostage by Somali pirates.