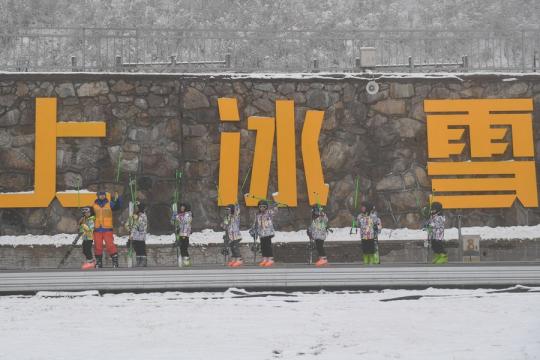 Students from Shanchuan Primary School are seen at a ski resort in Anji county of Huzhou city, East China's Zhejiang province, Jan 9, 2022. The primary school has set up skiing course to promote winter sports and established the first campus skiing team in the city. (Photo/Xinhua)

About three weeks out from the Beijing Winter Olympics, China has exceeded its goal of involving 300 million people in winter sports before the Games, with researchers predicting a sustainable future.

Thanks to promotions around the Olympics, growing public interest and the improvement of facilities, the number of Chinese people who have participated in winter sports training, amateur or professional competitions, and outdoor and indoor winter sports-related leisure activities has reached 346 million, surpassing the goal of 300 million set in 2015 when Beijing won the Olympic bid, the country's winter sports governing body said in a report released on Wednesday.

The report was based on a survey conducted by the National Bureau of Statistics, which analyzed data and information collected from 40,100 respondents from 31 provincial-level regions across the country since October.

It said the figures meant one in four Chinese people has taken part in winter sports and activities at least once.

Among those polled, 38.4 percent said they participated in winter sports and activities once or twice a year, while 70.3 percent got involved for recreation and entertainment, as opposed to other reasons such as fitness, fashion and professional athletics.

A main selling point in Beijing's winning bid for the 2022 Winter Olympics, the realization of the engagement target has raised expectations among the international winter sports community of the great market potential in the world's most populous nation.

"These Winter Games will open a new era for winter sports globally as 300 million Chinese will become familiar with sport on snow and ice," International Olympic Committee president Thomas Bach said in his New Year message.

Johan Eliasch, president of the International Ski Federation, said China's future on the global winter sports landscape is bright and he expected many opportunities for cooperation with the country's winter sports governing body.

"When it comes to snow sports, China has so much potential to make an impact on the recreational and professional sports landscape and the potential to bring the sports to the next level," Eliasch said.

"A country with the ambition to bring 300 million people to our sport is a testament to its long-term vision and an amazing opportunity. It is an opportunity that the FIS is very pleased to support."

According to data from the National Winter Sports Administrative Center, China had built 654 ice rinks and 803 ski resorts by the end of last year, up 317 percent and 41 percent respectively since 2015.

Such rapid development in facilities is laying a solid foundation for businesses operating in winter sports and related outdoor leisure activities to reach an estimated total value of 800 billion yuan ($125 billion) by the end of this year, according to a national guideline on mass sports participation and sports consumption issued by the State Council in 2019.

"The realization of the goal should be greatly attributed to the investment in facility development, the education of youth in schools and the improvement of amateur training at the grassroots level," said Wang Yuxiong, director of the Sports Economics Research Center at the Central University of Finance and Economics.

"Yet this is not the end, but only the beginning for sustainable development of the winter sports sector in China because of the post-Olympics influence and people's growing demand for a healthier lifestyle and diversified recreational activities. Winter sports have it all."