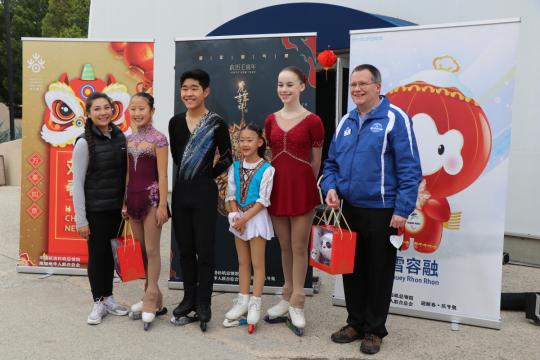 About 60 Chinese living in the U.S. gathered to watch young figure skaters display their agility and grace at an exhibition in California on Monday ahead of the 2022 Winter Olympics in Beijing.

Chinese students, Chinese American elected officials and community members, many of whom waved Chinese and American flags, joined the Chinese consul general in Los Angeles and the Chinese-American Federation at the Pasadena Ice Skating Center for the event, despite the chilly weather.

Organizers said the event demonstrates the Chinese diaspora's support for Beijing's successful hosting of the Olympics and sent well wishes to athletes around the world before the Games open early next month.

"Beijing will once again open its arms to welcome Winter Olympics athletes from all over the world. We are fully confident and capable of putting together a wonderful and outstanding Olympics to the world," said Zhang Ping, China's consul general in Los Angeles.

The Olympics not only provide an opportunity for athletes around the world to demonstrate their skills, but are also a platform for fostering mutual understanding, enhancing cultural exchange and building friendships, Zhang said. Successfully hosting the 2022 Winter Olympics and the Paralympics is important to the world and to China, he stressed.

"This is the vision of world peace. I believe that with the joint efforts of the Chinese government, Chinese people and athletes from all over the world, the Beijing Winter Olympics will be a complete success," he said.

The 2022 Winter Olympics and Paralympics will start on Feb 4 in Beijing.

Randy Winship, general manager of the Pasadena Ice Skating Center, said that by hosting the competition, Beijing will becomes the first dual-Olympics city — hosting both the Summer (2008) and the Winter Olympics.

"Beijing is making history this year, and we wish them all the success," he said.

Winship, who has skated for 47 years, noted that he has "a special connection with skating in China".

He helped to train Chinese coaches in Singapore and at a skating school in Shenzhen. In 2006, Winship also directed the Skate Asia competition in Shenzhen, which was the largest recreational ice-skating competition held in China, with more than 1,000 skaters from 11 countries. It was one of the highlights of his professional career, he said.

Sky Qian, president of the U.S. Southwestern Chinese Students and Scholars Association, who led a coalition of 28 Chinese students supporting the event, told China Daily that Chinese overseas students feel proud that the Winter Olympics are being held in their motherland.

"When we get our health packets from China during the pandemic, our hearts feel very warm. We send our sincere wishes to the 2022 Beijing Winter Olympics," said Qian, who's a junior studying at the University of California at Irvine.