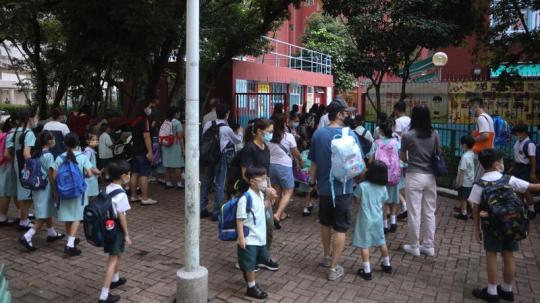 Students, some accompanied by their parents, return to school in Tseung Kwan O, Hong Kong, on Sept 1, 2021, the first day of the new academic year. (CALVIN NG / CHINA DAILY)

Speaking to the press, Lam cited the existence of silent transmission chains in the community, adding that it was a hard decision to make.

Face-to-face classes at kindergarten and primary schools have to be suspended until after the Lunar New Year period at the start of February, she said.

Three young children aged three and four were recently confirmed infected. Their classmates and teachers, considered as close contacts, have been sent to quarantine centers.

"It was not ideal" to see young students having to be isolated at quarantine centers, she added.

Lam noted that following health experts' recommendations, the government will administer Sinovac vaccines for children aged from 5 to 11. Given that schools will close from Jan 14 for children of this age group, the vaccination program will roll out after school resumes in February.

The chief executive also announced a new round of the anti-epidemic fund to subsidize businesses affected, including eateries where dine-in services were banned after 6 pm and travel agencies that have been hit hard since the beginning of the pandemic. More details of the fund will be released on Friday.

Lam said she remain optimistic and confident about overcoming this round of outbreaks.