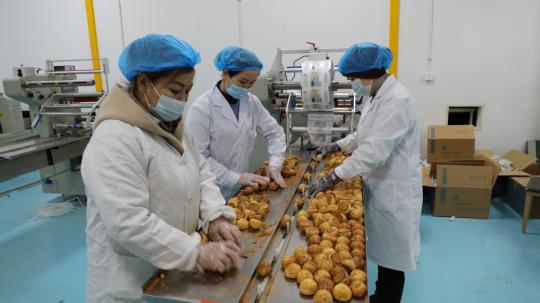 A truck from Horgos, Xinjiang Uygur autonomous region, carrying 1 million Uygur-style bread buns arrived in Xi'an, Shaanxi province, on Friday as part of support efforts for the city, which is experiencing a COVID-19 outbreak.

Relief materials have also poured into the city from other provincial-level regions to help the population get through the epidemic.

The Xi'an Charity Association received the buns, worth 1 million yuan ($157,000), and distributed them to police officers, medical personnel, volunteers and community workers who are combating the virus, the association said.

On New Year's Day, an international trade company based in Horgos decided to donate the freshly-made buns.

More than 200 employees, including those from the Uygur, Hui and Kazak ethnic groups, worked for 48 hours to produce and package the buns.

Telwardi Karhan, a workshop director at the company, said, "We quickly organized bakery workers once the decision was made to ensure the bread could be sent out as soon as possible."

On Jan 3, the buns set off in a truck on a journey of more than 3,000 kilometers from Xinjiang to Xi'an.

Zhu Zhisheng, president of the association, said he was grateful for Xinjiang people's care and support for people in Xi'an.

"The food will be sent to the people who need it most," he said. "It will certainly lift their spirits."

The university has been supporting the county's poverty-alleviation efforts for years.

The banner on the relief materials read "Rongshui county will bear in mind the help from the university forever and will help it fight the epidemic".

On Thursday, five trucks loaded with mutton, milk and vegetables from 19 enterprises and associations left Yinchuan, Ningxia Hui autonomous region, for Xi'an. On Monday, about 90 metric tons of vegetables were also donated to Xi'an by the Neijiang city government in Sichuan province, CCTV reported.