Order being restored in Kazakhstan after unrest 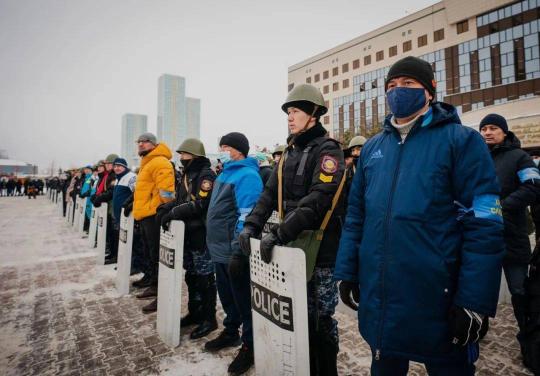 A number of "strategic facilities" in Kazakhstan are now under the guard of a peacekeeping force invited to restore order, the presidential office said on Sunday, as the chaos of days of violent protests eases and the government works for a return to normal life.

"A number of strategic facilities have been transferred under the protection of the united peacekeeping contingent of the CSTO member states," the presidential office said in a statement on a security briefing chaired by Kazakh President Kassym-Jomart Tokayev.

The Collective Security Treaty Organization is an alliance of Kazakhstan, Armenia, Belarus, Kyrgyzstan, Russia and Tajikistan.

At a government meeting on Saturday, the president urged the restoration of administrative and public facilities in Almaty, the nation's largest city, and other regions hit by the terrorist attacks.

He asked the prosecutor general, chairman of the National Security Committee, and acting ministers of internal affairs and defense to continue efforts to restore peace.

CSTO peacekeepers working in Nur-Sultan, the capital, have allowed some Kazakh law enforcement officers to redeploy to Almaty for the "counterterrorist operation", Tokayev said.

In a phone conversation on Saturday, Tokayev and Russian President Vladimir Putin agreed that leaders of the CSTO member states will have a videoconference in the next few days to discuss the unrest in Kazakhstan.

Tokayev informed Putin of the latest developments and noted that the situation is stabilizing. He thanked his country's CSTO partners, particularly Russia, for their assistance.

The presidents exchanged thoughts on the measures being taken to restore order in Kazakhstan.

Later, Putin spoke by telephone with Belarusian President Alexander Lukashenko and Armenian Prime Minister Nikol Pashinyan to discuss the Kazakh tensions and the organizing of the CSTO summit.

This came after Tokayev dismissed Karim Masimov as chairman of Kazakhstan's National Security Committee on Wednesday. Masimov was detained a day later on suspicion of high treason.

The Executive Committee of the Commonwealth of Independent States－the association of Russia and 11 other republics that were part of the former Soviet Union－said in a statement on Saturday that "the bandits" prepared in advance for the mass demonstrations in order to destabilize the situation in Kazakhstan and that they had received support from abroad.

CIS Executive Committee Chairman Sergei Lebedev voiced in a statement the committee's full support for the measures taken by Kazakh leaders and the CSTO countries to restore law and order.

Violent protests sparked by fuel price hikes have been rocking Kazakhstan for several days, leading to multiple deaths and many injuries. In total, 5,135 people have been detained for questioning as part of 125 separate investigations into the unrest, Reuters quoted local media as reporting.