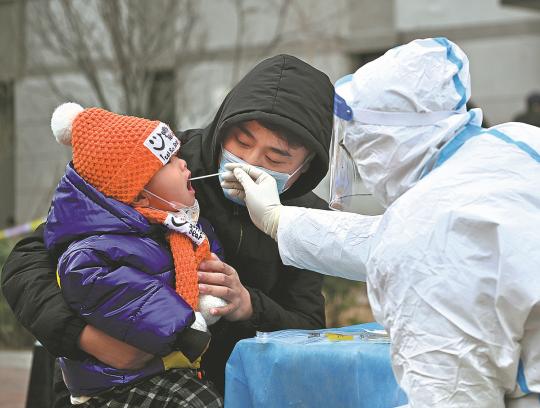 A child accompanied by a parent gets a nucleic acid test in Tianjin's Xiqing district on Sunday. Tianjin has launched citywide mass testing for COVID-19. (Photo/Xinhua)

The first two cases, a 10-year-old student and a 29-year-old employee at an after-school tutoring center, were identified on Saturday morning. Genome sequencing showed that they have contracted the highly transmissible Omicron variant, according to the city's disease control leading task force.

Close contacts of the cases were traced and nucleic acid testing was launched for high-risk areas in the city. By 9 pm on Sunday, 38 other people tested positive, including some primary and middle school students and their family members.

Zhang Ying, deputy director of the city's disease control and prevention center, said at a news briefing on Saturday that the virus had spread in Tianjin through three contacts. "Transmission in communities has likely existed for some time and more positive cases might emerge," Zhang said.

The source of the new cluster is still being investigated, she said.

Last year, Tianjin was the first city on the Chinese mainland to report an Omicron case. On Dec 13, city officials said a passenger who arrived from Poland on Dec 9 had tested positive for the new strain.

However, health officials said that there is not enough evidence to support the theory that the new cluster is linked to the previous Omicron case.

As part of control measures, Tianjin began citywide testing of its 14 million residents on Sunday morning. The mass testing is due to be completed on Monday, officials said. The health codes of residents who fail to take the test on time will turn orange－signifying their health status is suspicious, they said.

The Tianjin municipal government also issued a regulation on Sunday night to tighten travel out of the city.

People are advised to not leave the city unless it is extremely necessary. Travelers who have to leave the city would have to show their health codes and negative nucleic acid test results no older than 48 hours. The city will also strengthen management of travelers to Beijing to ensure they are healthy.

Li Hongzhong, Party secretary of Tianjin, said at a meeting on Sunday that the city, as a traditional guardian of Beijing, must shoulder the responsibility of protecting the capital from the virus's assault and quickly and efficiently curb its spread.

The Beijing Center for Disease Control and Prevention said on Sunday evening that people who commute between Beijing and Tianjin should work from home. Intercity trips are also discouraged unless for essential reasons.

Nationwide, the outbreak in Xi'an, Shaanxi province, is gradually being brought under control. Infection clusters in Henan and Zhejiang provinces, as well as Shanghai, are connected and at an early stage, He Qinghua, an official at the National Health Commission, said at a news briefing on Saturday.