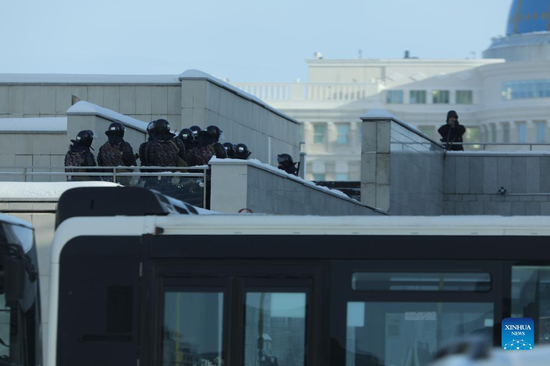 Military personnel patrol in front of the presidential palace in Nur-Sultan, Kazakhstan, Jan. 6, 2022. Kazakh President Kassym-Jomart Tokayev declared a state of emergency in the Kazakh city of Almaty and the Mangystau Region in southwest Kazakhstan on Wednesday. The mounting unrest prompted the Kazakh government to seek help from the Collective Security Treaty Organization, which has decided to deploy peacekeeping forces to Kazakhstan. (Photo by Kalizhan Ospanov/Xinhua)

The Russia-led Collective Security Council of the Collective Security Treaty Organization decided on Thursday to deploy peacekeeping forces to Kazakhstan to stabilize the situation in the Central Asian country, according to Council Chairman and Armenian Prime Minister Nikol Pashinyan.

"The forces will be deployed for a limited period of time in order to stabilize the situation in the country," he added.

Tokayev said in an address to the nation early on Thursday that he had appealed to the CSTO, which includes five other former Soviet republics, to combat what he called "terrorist groups" that had "received extensive training abroad".

Long seen as one of the most stable of the former Soviet republics of Central Asia, energy-rich Kazakhstan was facing its biggest crisis in decades after protests over rising fuel prices had swelled dramatically on Wednesday, when the protesters stormed and torched public buildings.

"It is an undermining of the integrity of the state and most importantly it is an attack on our citizens who are asking me ... to help them urgently," Tokayev said.

He said that the protesters had also commandeered five planes at the airport in the country's biggest city Almaty and said that Kazakhstan's air force was engaged in a "stubborn battle" near the city.

Tokayev vowed on Wednesday to "act as tough as possible" as the situation in the country becomes "extremely tense".

Earlier on Wednesday, Tokayev signed a presidential decree to accept the resignation of the country's government. In accordance with the decree, government members will continue to fulfill their duties until a new government is formed.

Chinese Foreign Ministry spokesman Wang Wenbin said at a daily news conference on Thursday that China hopes the situation in Kazakhstan will be stabilized as soon as possible and social order will return to normal.

The current unrest is the internal affair of Kazakhstan, and China believes that the Kazakh authorities will resolve the problem in a proper way, Wang said.

Stephane Dujarric, spokesman for United Nations' Secretary-General Antonio Guterres, said the UN is following the unrest in Kazakhstan with concern, and has called for restraint.

"I think it's very important for all involved in these current events to exercise restraint, refrain from violence, and promote dialogue in addressing all of the pertinent issues," Dujarric said.

After a night of unrest that saw more than 200 people detained, several thousand protesters stormed the mayor's office in Almaty on Wednesday afternoon and appeared to have seized control of the building, Agence France-Presse reported.