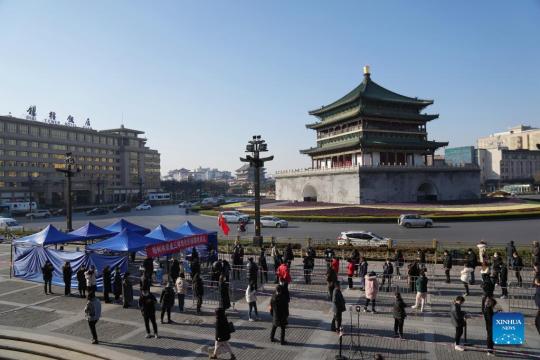 All districts, villages and communities in Xi'an, capital city of Shaanxi province, will implement closed management controls along with other preventive measures from Thursday, as the epidemic situation is still complex and grim, the city government said.

Fifty-two new COVID-19 patients were reported in the city on Tuesday and transferred to designated medical facilities for quarantine and treatment. A total of 143 locally confirmed cases have been reported in Xi'an from Dec 9 through Tuesday.

The majority of the patients have mild symptoms. Experts have been selected from several hospitals to treat groups such as the elderly, children and pregnant women, Yang Baoli, an official at the provincial health commission, said at a news conference on Wednesday.

By noon on Wednesday, 9,311 people who had close contact with confirmed cases and 21,787 people who had some contact have been quarantined. Xi'an has completed the second round of nucleic acid testing for about 10.8 million people, with 6.7 million results obtained, Yang said.

Analyses of data indicate that the current epidemic prevention and control situation is still "complex and grim" in the city, said Zhang Fenghu, deputy secretary-general of the Xi'an city government. Confirmed cases have been found outside areas shut down by the virus, an indication that community transmission has occurred, Zhang said.

"The city will implement closed management. Only one person in each family is allowed to go out to purchase daily necessities every two days," he said. Other people, except those working in epidemic prevention and control and vital industries, should carry certificates issued by their communities if they have to go outside, Zhang said.

All facilities will be temporarily closed except those conducting work related to epidemic prevention and livelihood protection. People are encouraged to work from home, he said.

Xi'an residents are also urged not to leave the city unless necessary, and traffic management departments have stepped up inspection of outbound vehicles and travelers to prevent the spread of the virus, Zhang said.

Bus lines in the city will be suspended, as well as freight delivery vehicles except those carrying daily necessities and epidemic prevention material. Taxis and online ride-hailing vehicles have been banned from medium- and high-risk areas and from operating outside urban areas, Zhang said.

There are enough grain, oil and vegetable supplies and prices are basically stable. Regulators will closely monitor the supply and demand of market goods as well as price changes.

"We will severely crack down on illegal activities such as price gouging, bidding up prices, selling counterfeit goods and fabricating and spreading false information about the epidemic," Zhang said.

"Communities should learn the medical needs of groups, provide basic health services and help those who really need to go out for medical treatment with proper personal protection."

Schools in the city should launch online classes, make full use of online education platforms and formulate online teaching and management plans, said Ji Yingqiu, an official from the provincial education working committee.

As of Wednesday, 3,574 schools in Xi'an had been closed, affecting around 1.78 million students.

Off-campus training institutions will suspend all offline training activities for students and educational authorities will give guidance to the schools to arrange online teaching, Ji said.