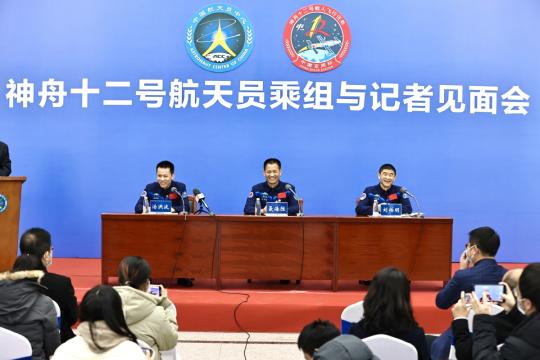 Shenzhou XII astronauts now under observation ahead of return to training

The three astronauts involved in the Shenzhou XII mission have recovered well after their 3-month spaceflight and will return to regular training once related health assessments are completed.

The three Shenzhou XII astronauts－Major General Nie Haisheng, Major General Liu Boming and Senior Colonel Tang Hongbo－have completed the convalescence phase. They are emotionally stable and in good psychological condition. Their weight has been maintained at the level before the spaceflight and their muscle strength, endurance and cardiopulmonary level have recovered well and achieved expected results.

"At present, we are carrying out special medical examinations and experimental data collection according to plan," Jing said, adding that the crew had entered the last recovery phase.

The Shenzhou XII crew, commanded by Nie, spent 92 days in space after the spacecraft was launched on June 17 on a Long March 2F carrier rocket, setting a new national record for the longest human spaceflight.

They performed two spacewalks during their stay in the Tiangong－Heavenly Palace－space station, as well as a number of scientific experiments and technological tests, before returning to Earth on Sept 17. 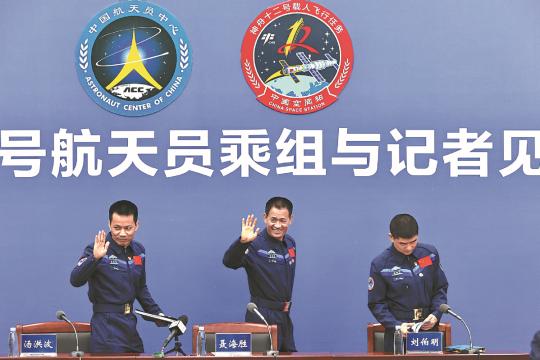 Major General Nie Haisheng (center), Major General Liu Boming (right) and Senior Colonel Tang Hongbo from the Shenzhou XII space mission leave after a news conference at Beijing Aerospace City on Dec 7, 2021. It was the astronauts' first official meeting with the media and the public after a three-month recovery period following the successful mission. [Photo by Zhu Xingxin/China Daily]

Nie and his crew members were the first inhabitants of China's new space station.

They were followed by the three-astronaut crew of Shenzhou XIII, which was launched in October.

The space station currently comprises the Tianhe core module, which was launched in April. Two more modules and two more manned missions are scheduled to dock with the Tiangong station next year.

Nie has flown in three manned missions and is the first Chinese astronaut to have stayed in space for more than 100 days.

He said each of the three missions brought him a new experience and he has experienced increasing comfort and reliability, more space for activities and a wider variety of food during each stay in space.

"This all thanks to the hard work of all space science and technology workers," he said.

Nie said the three crew members had started to perform some technical recovery training to prepare for future missions and will continue to learn more about the space station in case they have the chance to visit it again.