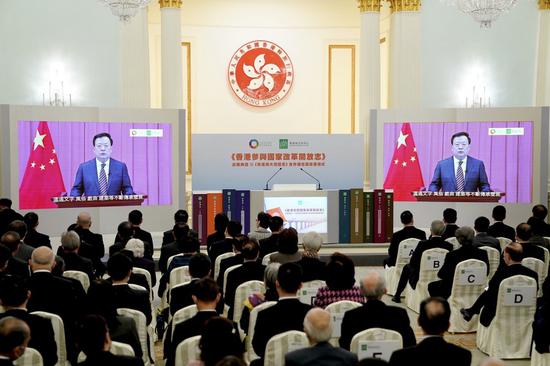 A chronicle on Hong Kong's Participation in National Reform and Opening-Up is unveiled at a ceremony held in China's Hong Kong, Dec. 6, 2021.(Xinhua/Lui Siu Wai)

The principle of "patriots administering Hong Kong" is the foundation of the steady and sustained implementation of "one country, two systems," Xia Baolong, head of the Hong Kong and Macao Affairs Office of China's State Council, said on Monday.

"Electing patriots to administer Hong Kong is not aiming at singularity, but plurality," Xia said in a video speech at a ceremony unveiling a chronicle on Hong Kong's Participation in National Reform and Opening-Up.

He said the responses from the society regarding the seventh-term Legislative Council (LegCo) election in the Hong Kong Special Administrative Region (HKSAR) fully demonstrated the characteristics of broad representation, political inclusion, balanced participation and fair competition under the improved electoral system.

He also stressed that the electoral system of the HKSAR is an internal affair of the People's Republic of China that brooks no foreign meddling.

"The Chinese people are highly confident in socialist democracy with Chinese characteristics and the democracy system that fits the actual situation in the HKSAR," he added.

Carrie Lam, chief executive of the HKSAR, said Hong Kong has not only made significant contributions to the reform and opening-up but has also benefited from the rapid development of the Chinese mainland.

She described the multiple roles of Hong Kong in the country's reform and opening-up as a witness, a participant, a contributor and a beneficiary.

A cooperation memorandum was also signed at the ceremony for the Guangdong-Hong Kong-Macao Greater Bay Area chronicle.