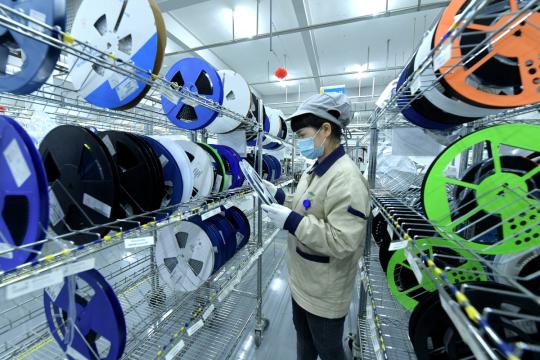 China will take measures to clear arrears owed to small and medium-sized enterprises, and ensure migrant workers' wages are paid on time and in full, a State Council Executive Meeting chaired by Premier Li Keqiang decided on Wednesday.

The meeting noted the relatively fast increase in the accounts receivable of SMEs and rising incidences of delinquent payments this year due to complex and challenging circumstances at home and abroad, sporadic COVID-19 cases in multiple places and other factors.

"Small and medium-sized enterprises have been under enormous pressure this year. In keeping with the requirement of supporting market entities, efforts will be intensified to rectify arrears to SMEs as the laws and regulations require," Li said.

Regulations on ensuring payments for small and medium-sized enterprises will be strictly implemented, to tackle malpractices including abusing their market advantage to intentionally get into arrears.

Government bodies and public institutions that purchase goods, projects and services from SMEs should make payments within 30 days upon completion of the order, and the time frame for making such payments should not exceed 60 days.

"We introduced a regulation with explicit stipulations on this matter. We must make sure they are effectively enforced."

Delinquent payments by government bodies, public institutions and large State-owned enterprises to SMEs will be strictly investigated, and accountability will be seriously enforced. Serious acts of bad faith will be disclosed to the public.

"Wage arrears for migrant workers are closely related to this issue," Li said. "There are nearly 290 million migrant workers in China. Wages are the major source of income for rural residents in China. Governments at all levels and SOEs should lead by example to clear arrears, and micro, small and medium-sized enterprises must also pay migrant workers the remunerations they deserve as the laws and regulations require."

The meeting highlighted that at the turn of the year, various programs and projects enter the stage of fund settlement. A special winter campaign will be carried out to intensify efforts in addressing the wage arrears of migrant workers.

The project construction sector will be a priority, especially projects funded by governments or undertaken by SOEs. Implementation of relevant institutional arrangements such as special payment account and payment to migrant workers by general contractors on behalf of subcontractors will be reviewed across the board. Market regulation and audit-based oversight will be intensified.