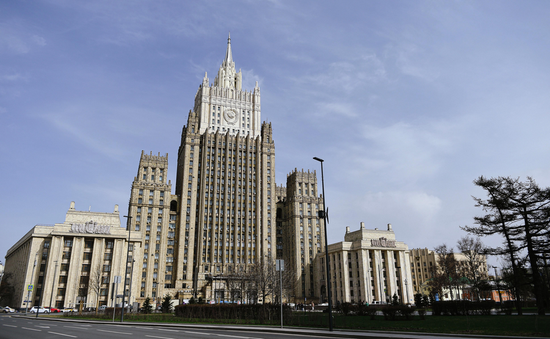 Photo taken on April 16, 2021 shows the Ministry of Foreign Affairs of Russia in Moscow. (Xinhua/Evgeny Sinitsyn)

"By Jan. 31, 2022, those who have been working at the U.S. Embassy in Moscow for more than three years must leave Russia," the ministry's spokesperson Maria Zakharova said during her weekly briefing.

If Washington does not correct its policy, another batch of U.S. diplomats must depart by July 1, 2022, she added, without specifying the number of the affected personnel.

The tit-for-tat retaliation came after the United States asked 55 Russian diplomats to leave the country in two batches by Jan. 30, 2022 and June 30, 2022.

The de facto expulsion as Moscow perceives was due to a State Department decision in December 2020 to impose a three-year limit on long-term assignments for staffers of the Russian Embassy in Washington, D.C. and Consulates General in New York and Houston.

Zakharova said at her briefing that the restrictions went against diplomatic norms and were "an obvious encroachment on the sovereign right of a country."

She stressed that Washington ignored Russia's efforts to find a constructive solution to the issue, thereby forcing Moscow to take a reciprocal response.