95 percent of residents in Tibet covered by basic medical insurance 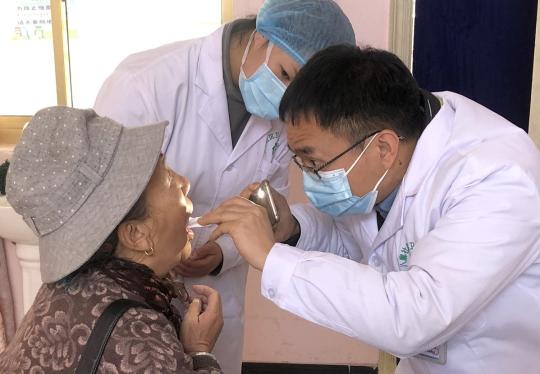 A Tibetan patient has her throat examined at the Barkor Community Health Service Center in Lhasa, Tibet, by Tao Yongkang, a Tibet-Aid physician from the China-Japan Friendship Hospital. (PHOTO PROVIDED TO CHINA DAILY)

More than 3.4 million people in the Tibet autonomous region have been covered by the basic public medical insurance system, with the coverage rate above 95 percent, regional officials said on Tuesday.

The maximum reimbursement for hospitalization expenses is as high as 90 percent.

The regional Party committee and government have always attached great importance to the improvement of people's livelihoods and medical security, and have made breakthroughs in solving the difficulties people face in obtaining medical treatment in hospitals and affording the high costs, Zheng Xuehong, deputy head of Tibet's Healthcare Security Bureau, told a news conference on Tuesday.

A multilevel medical care security system with basic medical insurance as the main body, insurance for serious illnesses as a supplement, and medical assistance as the foundation has been basically formed in the region, she said, adding that the government subsidizes annual premiums for the poor.

The regional government recently issued a document on deepening reform of the medical care security system that said by 2025, the functions of basic medical insurance, serious illness insurance, and medical assistance will be largely improved, the news conference was told.

Zhang Wei, another official from the bureau, said the financial subsidy from the government is larger than the individual payment of residents.

Lhasa resident Chungdak said he used to suffer from gallbladder disease and was hospitalized last year. The 58-year-old said he had benefited from the region's medical insurance policies.

"Getting sick is inevitable as I am getting older now, but I am not worried much about medical costs as I am covered by the insurance policy," he said.

"Around 70 percent of my medical expenses were covered by the basic medical insurance system, and another 20 percent was covered by a civil aid medical assistance project.

"My family condition is not very good, and medical expenses are not easy for my family, so I am very grateful for the medical insurance system."