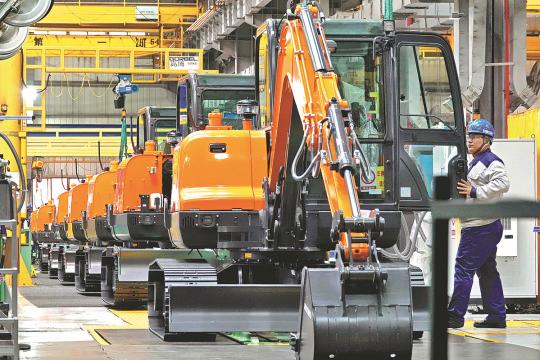 An employee works on the production line of an engineering equipment manufacturer in Yantai, Shandong province. (Photo: China Daily/Tang Ke)

More pro-growth policies are likely to kick in and consolidate China's economic recovery that has gained a firmer footing in November, with manufacturing activities returning to expansion territory, experts said on Tuesday.

Their comments emerged after the National Bureau of Statistics said China's official purchasing managers index, a key gauge of manufacturing activity, rose to 50.1 in November from 49.2 in October, marking a four-month high and indicating accelerated activity in the sector.

The PMI reading returned to expansion territory after two consecutive months of contraction, thanks mainly to stronger production levels, stabilized electricity supply and tempered hikes in raw material prices. A PMI reading above the mark of 50 indicates expansion, while one below the threshold signals contraction.

"A series of policy measures to ensure energy supply and stabilize market prices have borne some fruits. The tight supply of electricity eased while prices of some raw materials dropped significantly in November," said Zhao Qinghe, a senior NBS statistician.

The sub-index of production rose to 52 in November from 48.4 in October as factory activity recovered amid secured supply of electricity. Meanwhile, the sub-gauge of raw material prices dropped to 52.9 last month, versus 72.1 a month earlier, signaling softened momentum of rising raw material prices, according to the bureau.

Tempered raw material cost pressure has brightened the business conditions of smaller firms, as the PMI reading for small and medium-sized manufacturers came in at 48.5 and 51.2 in November, up from 47.5 and 48.6 in the previous month, respectively.

Wen Bin, chief researcher at China Minsheng Bank, said though the economy has showed signs of improvement last month, more data are needed to confirm the uptrend, considering that uncertainties have lingered and new downward pressure has emerged.

"Policy support to stabilize economic growth should intensify, both on the fronts of boosting domestic demand and stabilizing export growth," Wen said, stressing the need to continue securing supplies and aiding smaller businesses.

Although rising from October, the sub-indexes of total new orders and new export orders in the manufacturing sector have remained in contraction territory at 49.4 and 48.5, respectively, in November, NBS data showed.

Also, the expansion in services activity slowed due to local COVID-19 cases, with the PMI for the services sector dropping to 51.1 in November, compared with 51.6 a month earlier.

Li Qilin, chief economist at Shanghai-listed Hongta Securities, said the pandemic situation remains a key factor to watch given the emergence of the Omicron variant. If the latest variant spreads widely, it could intensify global supply shortages of some commodities and weigh on domestic consumption, he said.

Hu Yifan, head of macroeconomics for Asia-Pacific with UBS Global Wealth Management, said the Chinese central bank may cope with the downward pressure by reducing the reserve requirement ratio by the Spring Festival holiday, which will start from the end of January.

Also, the accelerated issuance of local government special bonds, a key funding source for infrastructure investments, will also help shore up the economy in the near term, Hu said.

The NBS data showed that infrastructure construction activities have accelerated in November as the PMI reading for the construction sector went up to 59.1, versus 56.9 in October.