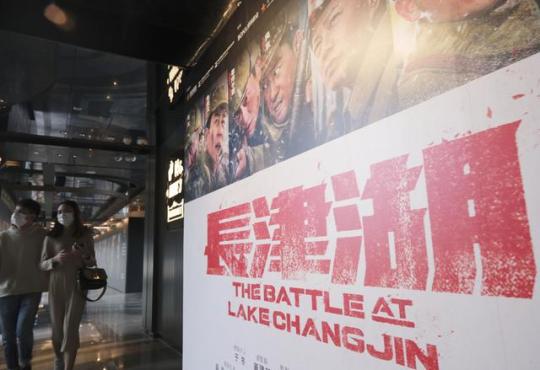 A poster of the film The Battle at Lake Changjin is seen at a cinema in Hong Kong, on Nov 15, 2021. (Photo/Xinhua)

A hit Chinese mainland war film has gained a groundswell of support in Hong Kong, with moviegoers calling it a "striking" and "must-see" epic.

The blockbuster The Battle at Lake Changjin, which began screening in Hong Kong on Nov 11, gives center stage to a group of Chinese People's Volunteers soldiers who fought fearlessly and determinedly in the War to Resist US Aggression and Aid Korea (1950-53), despite freezing cold. They participated in a key campaign near Lake Changjin, or Chosin Reservoir, in the winter of 1950, despite a lack of food and warm clothing in unbearable temperatures.

Crucindo Hung Cho-sing, chairman of the Hong Kong Motion Picture Industry Association, said the film sets a good example of pulling together educational, patriotic and commercial elements, adding it's the "best" in the genre he has seen in recent years.

"I think it is a 'must-see' film for everyone, especially for the young generation, to know about the hardship the nation has gone through to become the prosperous country of today," Hung said.

He said the film's cumulative box office has exceeded HK$10 million ($1.28 million) in the city, with the potential to reach HK$20 million.

The film uses the most advanced filming techniques to make the historical story a fascinating piece, he said, adding that the story has strong storytelling and world-class stunt scenes.

Hung gave credit to the directors, saying that their expertise and sensitivity in narration, human touch and action scenes contributed to the success of film.

Mandy Wong Sin-man, a 28-year-old clerk, said that she was deeply impressed and touched by the volunteers' strong faith and determination to fight for a peaceful life for following generations.

"The film was not only striking, but also enabled me to have a more comprehensive and intuitive understanding of the historical facts of this period," she said.

In an article published on the social media account of the Hong Kong University of Science and Technology's Graduate Students and Alumni Association, Wang Yang, the university's vice-president for institutional advancement, said the screening of the film in Hong Kong is meaningful, as it helps people cherish the peace of today.

The film is the second-highest-grossing title of all time at the mainland box office, with its cumulative box office having reached 5.68 billion yuan ($890 million) on Tuesday－only 7 million yuan behind the 2017 action film Wolf Warriors 2.