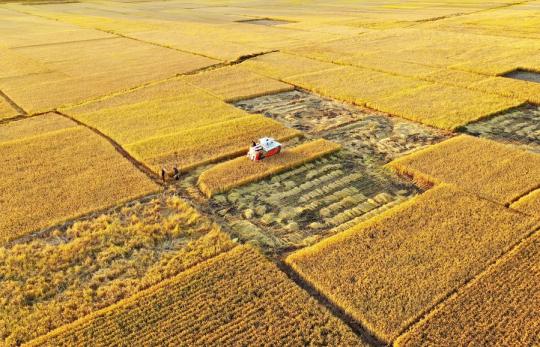 China's largest survey of its agricultural germplasm resources, which was launched in March, is progressing well, the Ministry of Agriculture and Rural Affairs said on Tuesday.

Sun Haoqin, deputy director of the ministry's department of seed industry, said the third national survey has collected livestock and poultry genetic resources on the Qinghai-Tibet Plateau for the first time and helped save some rare species that faced extinction.

The first two surveys, conducted more than 30 and 10 years ago, did not cover livestock or poultry genetic resources on the plateau or aquaculture germplasm resources.

Shi Jianzhong, Party chief of the National Animal Husbandry Station, said the survey team had built a multimedia database with information about the existing 948 livestock and poultry species.

"The database allows farmers and herders to check on their phones and figure out if they have found a new variety by comparing the current species," Shi said.

More than 200 experts have been dispatched to the Qinghai-Tibet Plateau to review the discoveries on site and they have double-checked DNA comparison analyses in laboratories, he added.

Based on the survey, 10 excellent livestock and poultry genetic resources discovered on the plateau were released on Tuesday, including two yaks, seven sheep and a special kind of chicken known as the naked neck chicken.

Li Shumin, an official with the ministry's bureau of fisheries, said 10 aquaculture varieties have been selected from the first survey of aquaculture germplasm resources.

"These resources have outstanding traits and genes, which can be applied to scientific research and breeding, or developed into fish for recreational use," Li said.

Sun said one of the biggest achievements during the survey has been the rediscovery and protection of endangered species such as the Shanghai buffalo.

"From this year, the central government will allocate 115 million yuan ($18 million) for protecting 159 national livestock and poultry genetic resources," he said.

The national crop seed bank went into trial operation in September, with a designed capacity of 1.5 million copies and a preservation timespan of 50 years, ranking the first in the world.

The national marine fishery biological germplasm resource bank was put into operation in October, with the largest investment, richest variety and most advanced facilities in the world, Sun said.

The ministry plans to finish the survey in three years to get a full picture of varieties, numbers, distributions and traits of the country's agricultural germplasm resources while protecting rare species facing extinction.

The number and distribution of agricultural germplasm resources keep changing, especially when urbanization and climate change are adding to threats of resource loss, Sun said.

"Protecting germplasm resources while discovering excellent new varieties is vital to realizing self-reliance of seed resources and vitalizing the seed industry," he added.