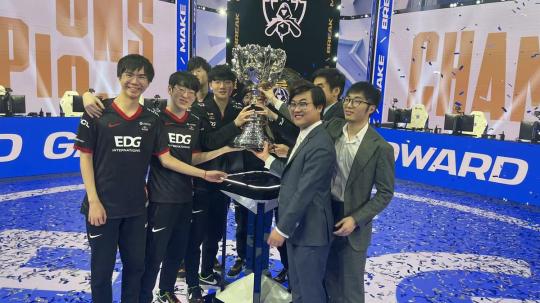 In pubs, university campuses and homes around the nation, millions of esports fans erupted with joy on Saturday night when Chinese club EDward Gaming claimed the world title in a thrilling final.

Underdog EDG beat defending champion Damwon KIA (DK) from South Korea 3-2 in the League of Legends 2021 World Championship in Reykjavik, Iceland, to ensure the Summoner's Cup will be headed to China.

This is the third world title won by a team from China's League of Legends Pro League, which is the nation's top-tier League of Legends professional league. Invictus Gaming won the championship in 2018 and FunPlus Phoenix in 2019.

EDG's victory became an instant sensation on Chinese social media. Among the top ten topics trending on social media platform Weibo on Saturday night, five were related to the final. The hashtag "EDG vs DK" had been viewed 470 million times by Sunday afternoon.

Due to the COVID-19 pandemic, this year's League of Legends championship had no spectators.

However, tens of millions of fans across the globe watched the matches through online broadcasts.

"This victory is the best reward for the efforts we've made over the years," EDG player Tian Ye, also known as Meiko, said after the victory. "The winning moment at the world championship will be the most memorable moment of my career."

Tian said people have different thoughts on the club. For years, many EDG fans have had really high expectations for the team which has disappointed them in the past

"This time we have changed their perceptions. I hope more fans support us and we continue to produce good performances in the future," he said.

He added that they don't consider themselves heroes. "We know other teams from China's LPL did not have satisfying performances at the world championship this year," Tian said. "So we were like the last hope of China's LPL. We meet fans' expectations. We are proud of ourselves."

The Chinese esports sector is experiencing dramatic development and growth.

According to the 2020 Global Esports Development Report published by Tencent Esports and Penguin Intelligence, the total number of Chinese gamers and fans reached 400 million at the end of 2020, representing a 14.3 percent annual growth rate. The Chinese esports market was valued at 13.8 billion yuan ($2 billion) in 2019.

The inclusion of esports at major sporting events has been a much-discussed topic in recent years. Last week, the 2022 Hangzhou Asian Games organizers announced esports will be an official medal sport at next year's Asiad event.

Esports joined the Asian Games for the first time as a demonstration sport at the 2018 edition in Indonesia, where China won two gold medals and a silver.