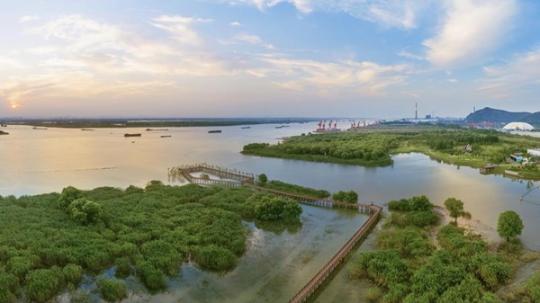 An aerial view of the Xuejiawa ecological park on the eastern shore of Yangtze River in Ma'anshan, Anhui province on June 29, 2021. (Photo by Zhang Mingwei/For chinadaily.com.cn)

China will step up the integrated development of the Yangtze River Delta region in a bid to inject new impetus into the national economy, the nation's top economic regulator said on Thursday.

Cong Liang, deputy head of the National Development and Reform Commission, said the commission will step up the implementation of the newly released plan for the Yangtze River Delta region's integration during the 14th Five-Year Plan (2021-25) period, with a key focus on introducing supportive policies, tackling major issues such as new infrastructure construction and implementing major projects in the region.

The region, which consists of Shanghai and Zhejiang, Jiangsu and Anhui provinces, has reaped major benefits from its integrated development during the past three years, Cong said at a news conference in Beijing.

"Serving as a dynamic growth engine in the nation, the Yangtze River Delta region is increasingly playing a key role in spurring the nation's economic growth," Cong added.

Data from the commission showed that the region's share of overall national GDP had increased from 24.1 percent in 2018 to 24.5 percent during the first three quarters of this year.

According to the plan for the region's integration during the 14th Five-Year Plan period, the region is set to see considerable progress in its integrated development by 2025, especially in fields such as science, innovation, infrastructure and public services.

By then, 70 percent of the region's permanent residents will live in urban areas, the plan said, and its research and development spending will account for more than 3 percent of the GDP.

Wu Qing, vice-mayor of Shanghai, said the city will ramp up its efforts to promote the construction of the Yangtze River Delta region's scientific and technological innovation community.

Wu said Shanghai will make a big push to promote the construction of major scientific and technological infrastructure, accelerate the creation of an open and shared regional innovation network and support more companies to list on the Shanghai Stock Exchange's Science and Technology Innovation Board.

Fan said Jiangsu needs to realize a shift from the low end of the value chain to the middle and high end of manufacturing, as well as strengthen the industrial and supply chains.

Powered by advantages in the booming digital economy and the private sector, Zhejiang will work with other areas in the region to innovate in the integration system and mechanism, promote the coordinated development of the region and give stronger impetus to high-quality development, said Chen Jinbiao, executive vice-governor of Zhejiang.

According to Chen, intensified efforts will be made to accelerate the construction of a collaborative innovation industrial system, create major scientific and technological infrastructure clusters and jointly build world-class advanced manufacturing clusters as well as strategic emerging industrial clusters in the region.

Liu Hui, executive vice-governor of Anhui, said that the province serves as a key hub connecting the east and west of the Yangtze River Economic Belt.

To better play its key role in supporting the high-quality and innovation-driven development of the region, Liu said Anhui will actively promote cooperation with key innovation platforms such as Optics Valley in Wuhan, capital of Hubei province, and Zhangjiang in Shanghai.

More efforts will also be made to strengthen cooperation with key industrial clusters in Shanghai, Jiangsu and Zhejiang and China's central region and create a large cross-regional market, Liu added.