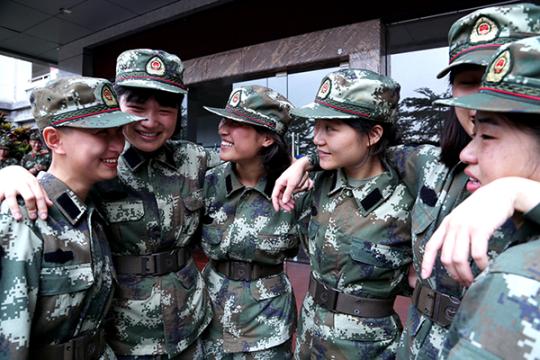 Veterans in Shenzhen, South China's Guangzhou province, are seen taking a picture together during the military retirement ceremony held on Aug 31, 2017. (Photo/Xinhua)

A special graduate enrollment plan for retiring undergraduate-level veterans in 2022 was issued by the Ministry of Education on Wednesday.

The plan, encompassing over 499 colleges and universities in China, aims to enroll a total of 6,770 veterans as graduate students.

Among the designated regular institutes of higher education, the University of the Chinese Academy of Sciences is tasked with the largest quota of 130 admissions, followed by 100 admissions allocated to the North China Electric Power University, according to the document released online.

According to an official statement posted on the Ministry of Education's website, the special graduate enrollment plan is part of the "Retiring Undergraduate-level Veterans Program" and the effort is an important component of nationwide graduate school enrollment.

Implemented since 2018, the program is an important measure aiming to support the modernization of China's national defense.

"In order to encourage more undergraduates to join the army and to provide more channels of growth and talent development for retiring undergraduate-level veterans, the program will continue to be implemented in 2022," said the statement.