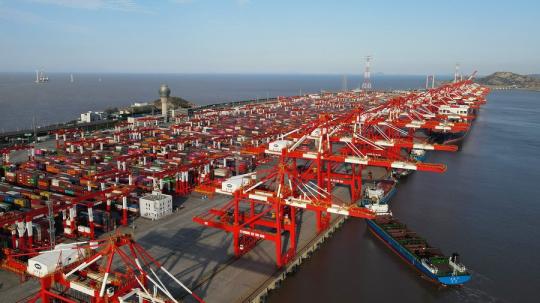 China has fully and effectively fulfilled its World Trade Organization commitments and earned wide recognition from the vast majority of WTO members, a senior commerce official said on Thursday.

Since its accession to the WTO in 2001, China has made vigorous efforts to align itself with WTO rules, open its market and abide by WTO rules, Wang Shouwen, vice-minister of commerce, said at a news conference on the WTO's eighth trade policy review of China, conducted from Oct 20 to 22.

China has received full recognition from the director-general of the WTO and the vast majority of its members, said Wang, who is also China's deputy international trade representative.

China's overall tariff level has dropped from 15.3 percent at the time of joining the WTO to 7.4 percent, lower than that of all developing members and close to that of developed members of the organization, he said.

China also supports efforts to make necessary reforms to the WTO, such as reviving the functions of its appellate body and establishing new approaches to make progress in emerging areas including e-commerce, so as to safeguard free trade and the multilateral trading system and narrow development gaps around the world, Wang said.

As a firm supporter and proactive participant in the multilateral trading system, China has strictly followed WTO rules and fulfilled all its commitments, making great contributions to the world economy and winning wide respect, according to experts and business leaders.

They also said China's stance on WTO reforms demonstrates its unwavering support for multilateralism and development.

Zhou Mi, a senior researcher at the Chinese Academy of International Trade and Economic Cooperation, said China's position reflects the core principles of the WTO to promote development and solve the common concerns of its members, while recognizing differences in development levels.

China also wants new situations in international trade to be noted and taken into consideration. "All those suggestions are important for stabilizing the multilateral trading system and strengthening the WTO's authority and effectiveness," Zhou said.

Wang criticized some unfair rules on agriculture and provisions regarding the Aggregate Measurement of Support, which he said severely distort international trade in the sector.

A number of developed members that have high levels of AMS are able to provide very high levels of subsidies to specific products. However, the majority of developing countries have no entitlement to AMS and can only subsidize up to 10 percent of the product output value, Wang said.

China supports the elimination of the AMS provisions that have resulted in large amounts of subsidies to severely distort trade, while keeping the minimum domestic subsidies for agricultural products, he said, adding the latter have little impact on trade, but are crucial for safeguarding agricultural product supplies and agricultural security, as well as the livelihood of small-scale producers.

Yan Dong, head of the Commerce Ministry's Department of WTO Affairs, said China believes discussions over provisions regarding industry and agriculture subsidies must be held as part of reform discussions to ensure fair competition in both industrial and agricultural sectors.

China also believes tightening control over application of trade remedies, such as anti-subsidy and anti-dumping measures, should be included in the discussions to reduce the abuse of such measures.

Restoring nonactionable subsidies should also be discussed, mainly to leave policy space for member countries to act on the COVID-19 pandemic and climate change, he said.

"Openness and cooperation are the only way to promote the steady development of society in a world facing enormous challenges and opportunities," she said.