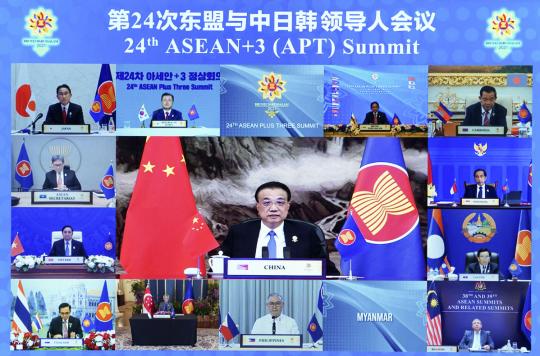 Premier Li Keqiang highlighted on Wednesday the importance of deepening economic integration and industrial cooperation in Southeast and East Asia, saying that the region should jointly promote the growth of the digital economy and pursue green and sustainable growth.

Addressing the annual ASEAN-China, Japan and Republic of Korea leaders' meeting via video link, Li urged the nations to make full use of existing cooperation mechanisms, jointly work toward a comprehensive and balanced economic recovery and develop the region into a more open, inclusive and sustainable region.

The meeting, also known as 10 3, also brought together ROK President Moon Jae-in, Japan's new Prime Minister Fumio Kishida and leaders from the 10 Association of Southeast Asian Nations member states. This year marked the 24th meeting of the grouping, which was first held against the backdrop of the 1997 Asian financial crisis.

Li called for measures to further bolster public health governance, saying that the building of an ASEAN Plus Three reserve center for emergency medical replies should be expedited to enhance the region's capacity to respond to the COVID-19 pandemic.

On the Regional Comprehensive Economic Partnership, Li urged other nations to hasten work for the agreement to take effect as early as possible, and to continue to advance free trade and pursue higher-level integration. China was the first country to ratify the RCEP.

Signed by 15 countries including China, Japan, the ROK and ASEAN member states in November last year, the RCEP represents the world's largest free trade agreement, covering a third of the global population and accounting for 30 percent of the world's GDP.

China will host capacity building programs, such as personnel training, and share its experiences on RCEP implementation for interested governments, business chambers or associations, and companies from ASEAN countries, Li said.

He added that China will also organize a symposium for the high-standard implementation of the trade pact next year and welcomes the active participation of all sides.

To bolster industrial cooperation in Southeast and East Asia, Li said Beijing supports efforts to expand the ASEAN travel corridor to include China, Japan and the ROK to bolster the fast lanes for essential travel.

China will host a forum focusing on industry and supply chain cooperation and another for young international scientists, he added. Beijing will also propose the development of an ASEAN Plus Three low-carbon cooperation partnership and step up cooperation through policy dialogue and capacity building, Li said.

The meeting also adopted a declaration on enhancing cooperation over the mental health of teenagers and children.