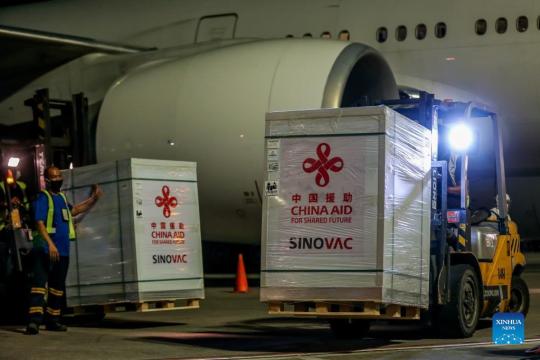 China has provided over 1.5 billion doses of its COVID-19 vaccines to 106 countries and four international organizations this year, playing a significant role in reining in the virus and advancing global collaboration, said Luo Zhaohui, chairman of the China International Development Cooperation Agency.

The country has also delivered large amounts of antivirus materials, such as protective clothing, masks and respirators, to 150 countries and 13 international organizations, Luo added.

He said that during the pandemic, China has launched "the longest and the most extensive" emergency humanitarian aid initiative since the founding of the People's Republic of China in 1949.

He said that when the Delta variant caused serious virus flare-ups in South Asian and Southeast Asian countries in late April, the country promptly rolled out a new program to send antivirus materials to Nepal, Afghanistan, Laos, Cambodia, Myanmar and Sri Lanka.

China has managed to overcome tight supplies and production capacity constraints, according to Luo.

"Within a few days, we had arranged and dispatched a medical expert team to Laos and sent medical supplies to Nepal," he said.

In addition, China has held over 1,000 video conferences to share its knowledge about fighting the outbreak, has dispatched more than 10 expert health teams and has established an inventory for stocks of medical supplies planned for South Asia.

More than 80 million doses of vaccines were given to neighboring countries as donations, he added.

"Because China has accumulated experiences in battling the virus and winning time for the world to combat the pandemic, many neighboring countries are eagerly anticipating assistance from China and pinning their hopes on us," Luo said.

"We did not let them down," he said, adding that China's assistance had resulted in "outstanding and direct benefits".

Since last year, Ruili, a city in Yunnan province bordering Myanmar, was locked down three times due to new outbreaks.

The circumstances prompted China to cooperate with and supply vaccines and antivirus materials to northern regions of Myanmar, according to Luo.

He said the goal is to strengthen disease prevention efforts along the borders and help contain local outbreaks in Myanmar while preventing imported infections in China.

"China's selfless foreign assistance stands in stark contrast to the aloofness of some other large countries," he added.

Zhou Liujun, vice-chairman of the cooperation agency, said that since the pandemic broke out, China has delivered more than 120 batches of testing kits, respirators and medical supplies to 50 African countries and the African Union, and it has dispatched expert medical teams to 17 African countries.

China has also set up nearly 400 foreign aid projects to bolster economic recovery in Africa. "Nearly 10,000 Chinese workers have manned their positions despite the raging virus," he added.

In the meantime, a new China-funded headquarters for the African Centers for Disease Control and Prevention in Ethiopia began construction late last year. In addition, a maternity and child healthcare hospital in Senegal and an infectious disease department building at a hospital in Mauritania－both funded by China－have been handed over to local authorities and put into use, he added.

An increasing number of countries and people are receiving China-developed vaccines, said Deng Boqing, vice-chairman of the agency. He said the expanding vaccinations have fully attested to domestic vaccines' safety and efficacy, on top of growing clinical evidence.

"Domestic vaccines that are donated or sold overseas have played an active role in building herd immunity across the world," he added.