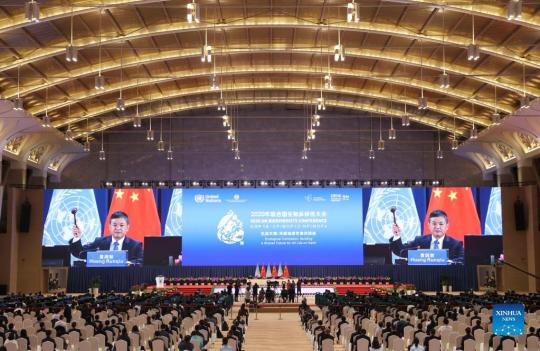 The Kunming Declaration is adopted at the High-Level Segment of the first part of 15th meeting of the Conference of the Parties to the Convention on Biological Diversity (COP15) in Kunming, Southwest China's Yunnan province, Oct 13, 2021. （Photo/Xinhua）

Participants at the United Nations Biological Diversity Convention have adopted the Kunming Declaration, as a two-day high-level segment of the 15th meeting of the conference of the parties to the convention, or COP 15, concluded on Wednesday.

COP 15, the largest UN gathering on biodiversity in a decade, is tasked with elaborating on the post-2020 global biodiversity framework and identifying new protection goals through 2030.

The event, held in Kunming, Yunnan province, runs until Friday and will resume in the first half of next year.

Concerned that the ongoing loss of biodiversity jeopardizes the achievement of the UN Sustainable Development Goals and other international goals and targets, the declaration said, "We declare that putting biodiversity on a path to recovery is a defining challenge of this decade".

It takes note of the calls made by many countries to protect and conserve 30 percent of land and sea areas through well-connected systems of protected areas and other effective area-based conservation measures by 2030.

And it made a series of commitments on biodiversity conservation.

The declaration made a commitment to "ensure the development, adoption and implementation of an effective post-2020 global biodiversity framework".

The framework should include provision of the necessary means of implementation, as well as appropriate mechanisms for monitoring, reporting and review, to reverse the current loss of biodiversity and ensure that biodiversity is put on a path to recovery by 2030 at the latest, it said.

It also pledged to work to continue to promote the integration, or "mainstreaming" of conservation and sustainable use of biodiversity into decision-making.

Efforts will be made to "reform incentive structures, eliminating, phasing out or reforming subsidies and other incentives that are harmful to biodiversity".

Another commitment included in the declaration was to increase the provision of financial, technological and capacity-building support to developing countries necessary to implement the framework.

Dimitri de Boer, chief representative for China of ClientEarth, an environmental law charity, said the main purpose of the declaration is to reaffirm the global political commitment to tackling the biodiversity crisis, and toward the process of coming to agreement on the post-2020 global biodiversity framework.

"Perhaps most importantly, the declaration provides strong political commitment among all parties to continue to step up action now, without waiting for the adoption of the post-2020 framework," he said.