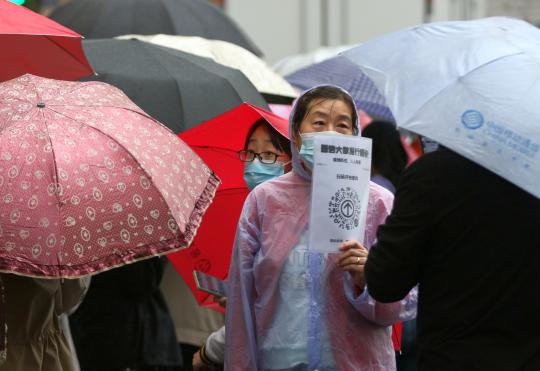 A community worker holds a QR code in the rain to check on the travel information of people waiting for COVID-19 nucleic acid tests in Harbin, Heilongjiang province, on Wednesday. (Photo/CHINA DAILY)

Seven cases were found in Bayan county and the other in Nangang district, Ke Yunnan, deputy director of Harbin's health commission, said at a news conference on Wednesday night.

All the cases were detected among close contacts of the first three cases reported on Tuesday and have been transported to designated hospitals for medical observation and treatment.

The first case tested positive for the novel coronavirus during a nucleic acid test at the county's Second People's Hospital and then was diagnosed as a confirmed case on Tuesday.

All outpatient departments at the hospital began turning away new patients on Tuesday, and all patients were tested, Health Times reported on Tuesday.

The first round of nucleic acid tests covering all residents in the districts of Nangang, Daoli and Songbei in urban Harbin and Bayan county was scheduled to be completed before midnight on Wednesday, and tests covering residents in the other five districts and eight counties in the city will be completed before midnight on Thursday, the city's epidemic prevention and control headquarters said on Wednesday.

"Those who missed the test will receive a yellow health QR code and the code can only turn green after they finish the tests and get negative results," Ke said.

"To concentrate on nucleic acid screening and quickly cut off the source of the spread of the epidemic, COVID-19 vaccination across the city will be suspended for three days starting from Wednesday."

A total of 1,871 close contacts have been traced and 999 of them have provided samples for nucleic acid testing. Among those, 691 results have been received, including eight who tested positive.

The coronavirus risk levels of two residential communities in Xinglong town in Bayan were raised from low to medium on Wednesday, the headquarters said.

All residential communities and villages in Xinglong and within the jurisdiction of the Xinglong Forest Bureau will be strictly managed in lockdown mode, officials said. Each household can send one family member out every two days to purchase daily necessities.

Bus and rail services were suspended to keep people from gathering and spreading the coronavirus. But vehicles used for production or to supply necessities or help with epidemic prevention remain free to travel across the county.

From Tuesday to Wednesday night, the province reported 11 local confirmed cases, all in Harbin.