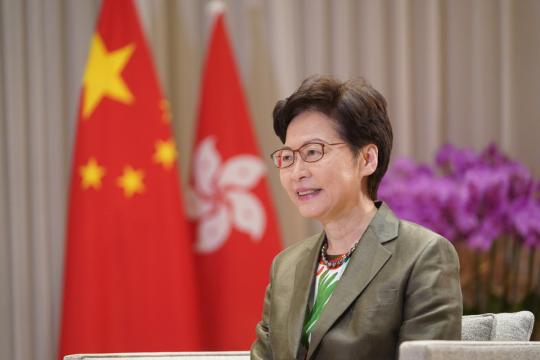 She made the announcement at a weekly media briefing ahead of Tuesday's Executive Council meeting.

During Lam's stay in Chengdu, the capital of Sichuan province, she will attend the high-level meetings of the Hong Kong-Sichuan Cooperation Conference to promote cooperation between the special administrative region and the populous province in southwest China.

The first plenary of such a conference was held in Chengdu on May 11, 2018.

In Chengdu, she will also go to the Pan-Pearl River Delta Regional Cooperation Chief Executive Joint Conference, discussing various matters with government leaders from the provinces of Fujian, Jiangxi, Hunan, Guangdong, Hainan, Sichuan, Guizhou and Yunnan as well as the Guangxi Zhuang autonomous region and Macao SAR. She will be accompanied by Chief Secretary John Lee Ka-chiu on both occasions.

At the invitation of the Chongqing authorities, Lam will also visit the municipality for the first time in her tenure as chief executive and inspect local Hong Kong-invested projects.

Her last stop is in Xi'an of Shaanxi province, where she will be at the closing ceremony of the National Games on Sept 27. As Hong Kong will co-host the next National Games with Macao and Guangdong province in 2025, Lam will receive the flag of the Games with representatives from two other regions.