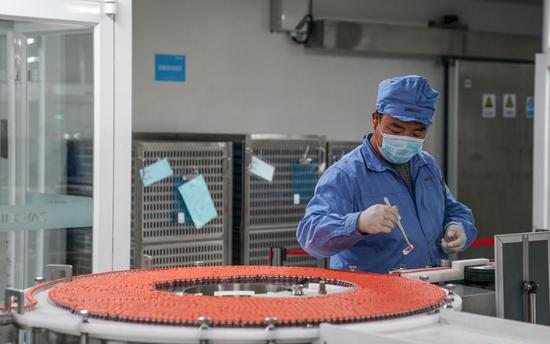 A staff member of Sinovac works on the COVID-19 vaccine production line in Beijing, July 8, 2021. (Photo/Xinhua)

Leaders, officials and scholars have hailed China for bolstering global unity in response to the COVID-19 pandemic through its proactive role in tackling shortages of vaccines and protective gear, and by helping the world's developing and least-developed countries in a sustainable way.

China has to date provided more than 1.1 billion doses of finished and bulk vaccines to over 100 countries and the COVAX global vaccine initiative, State Councilor and Foreign Minister Wang Yi said on Tuesday.

Beijing believes "it is fully within its capacity" to reach the goal of providing a total of 2 billion doses of vaccine to the global community before the end of the year, Wang added.

President Xi Jinping announced the goal of providing 2 billion doses while participating in and addressing the 13th BRICS Summit on Sept 9 via video link from Beijing. BRICS comprises the major emerging economies of Brazil, Russia, India, China and South Africa.

Xi added that China will donate an additional 100 million doses of vaccines to fellow developing countries this year.

Ecuadorian President Guillermo Lasso said on Sept 9, while expressing his appreciation to China for providing COVID-19 vaccines to help his government achieve the goal of immunizing 9 million people in 100 days, "We must especially thank China, its president, the government and the Chinese people, who understood our urgency."

In a follow-up to Xi's announcement, Wang, the state councilor, announced on Tuesday during an official visit to Singapore that, as of early September, China "had provided more than 200 countries and regions with masks, protective gowns, testing reagents and other material assistance" as well as help in making related commercial activities more convenient.

Wang, at a joint news conference on Tuesday with Singaporean Foreign Minister Vivian Balakrishnan, said that more than 320 billion masks, 3.9 billion protective gowns and 5.6 billion doses of testing reagents had been provided to other countries.

In addition, China has sent 37 groups of medical experts to 34 countries for COVID-19 relief, with Asia, Africa and Latin America among the top destinations, Wang added.

Ruan Zongze, executive vice-president of the China Institute of International Studies, said, "With its tangible actions that help shore up global unity in the COVID-19 response, China is fulfilling its solemn pledges that named vaccines as a global public good."

China's response to the pandemic has impressed the rest of the world further regarding the vision of building a community with a shared future for mankind, Ruan said. "Common safety is based on everyone's safety."

Meanwhile, China is spreading the benefits of its vaccine technology to the rest of the world, with a number of production facilities for vaccine packaging and distribution being built overseas.

Among the latest developments, the construction of the first Chinese COVID-19 vaccine production facility in Europe began in Serbia on Sept 9.

The factory aims to produce 30 million vaccine doses annually starting in April next year and is expected to supply Serbia and other countries in the region with vaccines from Chinese company Sinopharm.

Serbian President Aleksandar Vucic laid the foundation stone for the factory and said, "This is not a partnership of interest but a proof of friendship", according to a release from the presidential office.

Wang, the Chinese foreign minister, said on Tuesday that China has built or is building facilities for filling and labeling vaccine vials in 15 countries in order to build local vaccine production and distribution centers.

Chinese Ambassador to Brunei Yu Hong noted that China overcame huge difficulties in supplying vaccines to the world, as its "vaccine production capacity has not yet reached a sizable scale and domestic demand for vaccination has been rising sharply".

By doing so, China is "endeavoring to make contributions to ensuring vaccine accessibility to developing countries", she added on Monday at a handover ceremony for the second shipment of Chinese vaccines donated to Brunei.