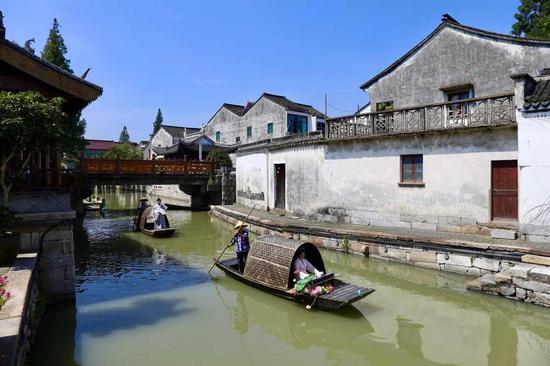 Performers in Han-style costumes perform on boats in a riverlet at Yigao village of Huzhou in East China's Zhejiang province on July 14, 2021. (Photo: chinadaily.com.cn/Zhu Xingxin)

As China's ancient villages eye protection measures, they are faced with fresh challenges posed by the nation's rapid urbanization process, even as it has ramped up preservation efforts in recent years, an expert said.

The nation has so far included 6,819 ancient villages on its protection list－the highest number on any agricultural heritage list in the world, according to the Ministry of Housing and Urban-Rural Development.

However, the number of ancient villages still declined between 2017 and last year, albeit at a lower rate than previous years, according to a report conducted by the Research Center of China Village Culture at Central South University in Hunan province.

Intensified protection efforts in recent years have helped ancient villages avoid even sharper decline. Between 2004 and 2010, the number was dropping at a yearly rate of 7.3 percent. That rate fell to 1.4 percent between 2017 and last year, thanks to the efforts, the report said.

In one of the more high-profile cases, a fire swept through Wengding, a village with a 400-year history in Lincang, Yunnan province in February, destroying 107 homes and leaving just four houses intact. Up until that point, the traditional Wa ethnic minority village had managed to preserve much of its culture and historic buildings.

Wu Can, a researcher at the village culture center, said stronger protection measures are still needed to prevent more ancient villages from vanishing.

After having made field trips to Hunan, Hubei, Anhui and Jiangxi provinces and the Guangxi Zhuang autonomous region in recent years, Wu and his fellow researchers found that most villagers prefer building new homes rather than renovating or maintaining old dwellings.

"Many migrant workers have become used to an urban lifestyle and see their old homes as symbols of poverty and backwardness and are eager to build new ones, even at the cost of demolition," he said.

Wu noted that there is a disparity between the affluent eastern regions and the less developed western areas, as the latter can only rely on State funding for protection efforts.

In 2016, Zhejiang provincial government announced the establishment of a 2 billion yuan ($310 million) fund for the protection and development of ancient villages.

However, even though authorities in Zhejiang have offered to cover as much as 70 percent of the cost of maintenance of traditional homes, some residents found the application procedures too complex and time-consuming, Wu said.

The latest guideline－rolled out by the general offices of the Communist Party of China Central Committee and the State Council, China's Cabinet－has incorporated the appeals of industry experts, he said.

Key measures include protecting the traditional look of villages, their historical settings and environments and natural landscapes, such as river systems, and passing on the craftsmanship of traditional buildings.

"The measures will provide strong impetus for the protection of traditional villages," Wu said.

Su Yunshan, an official at the Ministry of Housing and Urban-Rural Development, said at a news conference last week that future policy measures will focus on strengthening weak areas in infrastructure and public services in ancient villages and improving their environments to enhance residents' happiness.

"We must see the traditional villages as an integral cultural and natural ecosystem and carry out protection efforts across the board," he added.