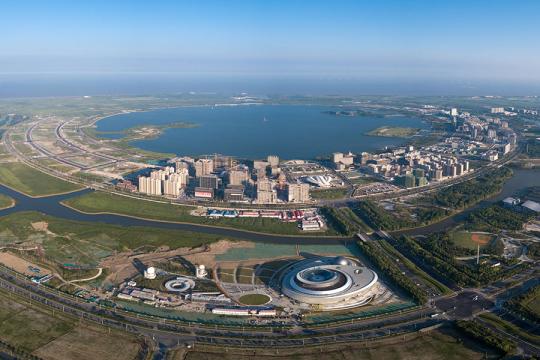 An aerial view of the Lingang Special Area of the China (Shanghai) Pilot Free Trade Zone in Shanghai. (Photo by Gao Erqiang/China Daily)

China's new measures to facilitate trade and investment at its pilot free trade zones, or FTZs, are expected to empower the latter with greater mandate, bring investors better convenience and raise the level of opening-up, officials said on Friday.

The State Council, China's Cabinet, on Friday issued a decree－a raft of new measures－on promoting reforms and innovation for trade and investment facilitation at the pilot FTZs, including more innovation in import trade, more diversity in types of commodity futures, and more efforts to attract overseas traders to futures trading.

Wang Shouwen, vice-minister of commerce, told a news briefing the new measures are expected to enhance trade facilitation at the pilot FTZs.

The potential of new trade norms will be unleashed, and support will be extended to help the pilot FTZs develop offshore trade, Wang said.

China's pilot FTZs have increased from 18 to 21 over the last year. Since 2018, new measures were taken every year to improve trade facilitation at the pilot FTZs. Wang said such measures have all helped improve institutional opening-up.

As part of the latest measures, the process of importing medical products, including medicine, will be further liberalized. Where conditions permit, the pilot FTZs will be encouraged to carry out imports of certain drugs and medical devices via cross-border e-commerce.

The varieties of commodity futures will be increased, and efforts will be expedited to bring in overseas traders and improve the regulatory framework for bonded delivery.

Tang Wenhong, an official from the Ministry of Commerce, said at the news briefing that the policy implementation process will be streamlined, and new measures will be put in place within one year, to ensure the new measures are implemented in a speedy manner.

"They have not only boosted local openness but have also leveraged the degree of trade openness at the national level," Wang said. "Some of the new openness measures at pilot FTZs have served as experiments for later national-level reforms."