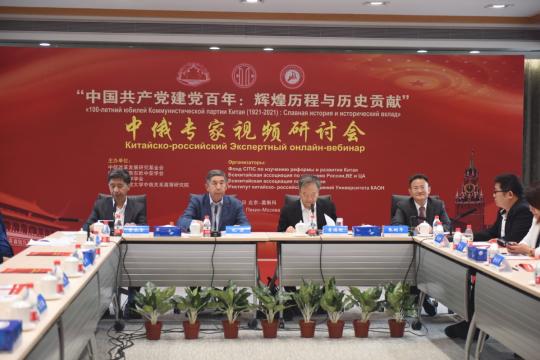 Industry experts are seen at the webinar to celebrate the 100th anniversary of the founding of the CPC in Beijing on June 24. (Photo provided to chinadaily.com.cn)

A webinar to celebrate the 100th anniversary of the founding of the Communist Party of China (CPC) was held in Beijing on June 24. Experts from China and Russia interpreted the successful experience of the CPC's development, expansion and its historic contribution to the development of China and to the world.

Kong Dan, chairman of CITIC Foundation for Reform and Development Studies, presided over the seminar. A total of 12 experts from China and Russia attended the event. Industry experts, journalists, academics and researchers joined the event both online and offline.

Wang Weiguang, Director of the National Ethnic and Religious Committee of the 13th CPPCC National Committee and former president of the Chinese Academy of Social Sciences (CASS), said, "This year marks the 20th anniversary of the signing of the Russia-China Friendship and Cooperation Treaty, and the year when the treaty expires. The world has undergone major changes unseen in a century. The world is facing major turmoil, adjustments, and reorganizations. Under this situation, China and Russia decided to extend the treaty based on their respective development interests, regional security and stability interests, and world peace interests. The treaty will continue to be the most important legal document for Sino-Russian bilateral relations, guiding both countries to jointly respond to threats and challenges from various quarters."

Alexander Dukin from Moscow State University said the CPC has made great achievements in economic development and reforms.