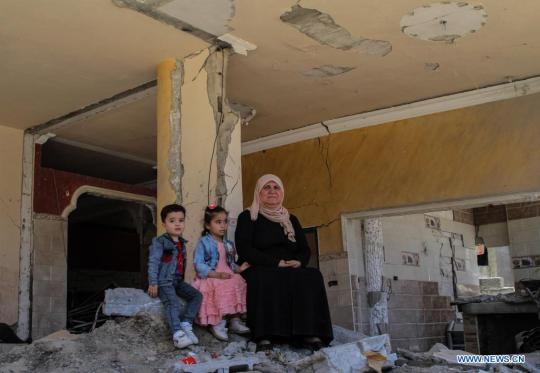 Palestinians are seen at a destroyed house in the northern Gaza Strip town of Beit Hanoun, on May 24, 2021. (Photo/Xinhua)

Calm is returning to Gaza as the cease-fire between Israel and Hamas has held since it went into effect on Friday, said the UN Office for the Coordination of Humanitarian Affairs (OCHA) on Monday.

Routine life is being restored throughout Gaza, which is controlled by Hamas. Some of the main roads have been made passable, and the authorities are fixing damaged electrical lines, water and wastewater networks, said OCHA.

It is critical that all parties work to maintain the cease-fire, it said.

A flash appeal for Gaza will be launched on Thursday, it said.

Lynn Hastings, the UN humanitarian coordinator for the occupied Palestinian territory, spent two days this past weekend in Gaza, speaking with people who she said endured unimaginable suffering over the 11 days of hostilities, according to OCHA.