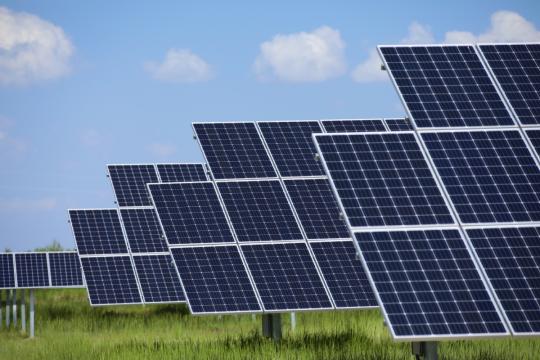 A vast expanse of solar panels shadows the surface of a semi-desert in Northwest China's Qinghai province, turning it into a photovoltaic park. (Photo provided to chinadaily.com.cn)

More than 30 companies have participated in the carbon emission trading trials for nearly a week, said Lai Xiaoming, chairman of the Shanghai Environment and Energy Exchange, during a forum on Saturday. The test runs, which use real capital, will last for some more weeks, he said.

According to the interim rules for carbon emission trading released on Jan 5, the system will place a cap on the total amount of allowed carbon emissions. A registered company needs one unit of quota for each metric ton of carbon emissions. It can buy such quotas with other companies.

A dual-city mechanism has also been adopted for the carbon trading system. The Shanghai Environment and Energy Exchange is responsible for building the trading system while the China Hubei Emission Exchange in Wuhan, Hubei province, deals with applications and collects data.

The real capital trading is part of the joint-test verification starting from May 7, which aims to test major functions such as real-time and historic market quotation analysis, account management and capital management.

During a visit to Shanghai last week, Li Gao, head of the department of climate change at the Ministry of Ecology and Environment watched the joint-test verification process. China's goals of peaking carbon emissions by 2030 and achieving carbon neutrality by 2060 will foster sustainable development, while the launch of the carbon trading system will be an important landmark, said Li. He also stressed on the need for information security in carbon trading.

Lai of the Shanghai Environment and Energy Exchange said that companies which need to control carbon emissions will be the first to participate in carbon trading, while institutions or individuals will be allowed entry only after the trading mechanism matures, he said.

Initial participants in the trading will be 2,225 electricity companies that are registered with the Hubei exchange. According to Yan Lei, head of the standards formulation office for reduction of carbon emissions under the Committee of Green, Circular and Inclusive Development of the All-China Environment Federation, the total carbon emission amount of these companies comes at 4 billion tons every year.

"It means that China will overtake the European Union and become the world's largest carbon trading market as soon as the trading system becomes operational," he said.

Zhang Xiliang, director of the Institute for Energy, Environment and Economy of Tsinghua University, said the eight industries qualified for such trading, according to the overall plan, include 7,500 companies whose total carbon emissions account for 72 percent of the country's total. If all the eight industries start carbon trading during the 14th Five-Year Plan (2021-25) period, significant progress can be made with respect to China's carbon neutrality goals, he said.