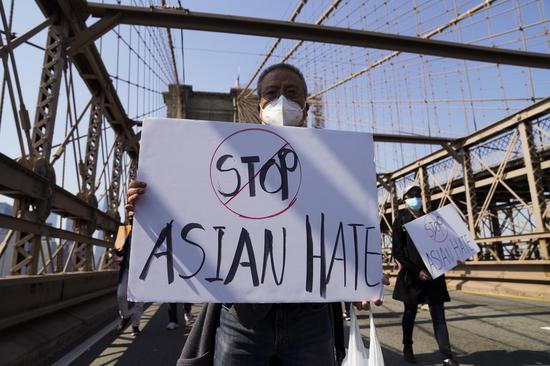 The U.S. House on Tuesday voted overwhelmingly to pass a bill aimed at combating the rise in anti-Asian hate crimes in the country, sending the legislation to President Joe Biden's desk for signature.

The COVID-19 Hate Crimes Act passed in a 364-62 vote in the House, with all no votes coming from Republicans. The Senate last month approved the bill on a 94-1 vote, with GOP Senator Josh Hawley of Missouri casting the lone no vote. Biden is expected to sign the bill into law as soon as Thursday.

"After a year of the Asian American community crying out for help, today Congress is taking historic action to pass long overdue hate crimes legislation and send the COVID-19 Hate Crimes Act to President Biden's desk," Judy Chu, Democratic congresswoman from California and chair of the Congressional Asian Pacific American Caucus, told reporters before the vote.

"The past year and a half has been one of pain and struggle marked by despicable and sickening acts of hate and violence against the Asian-American community," Democratic Congresswoman Grace Meng, who coauthored the legislation with Democratic Senator Mazie Hirono, said at a news conference on Tuesday.

"Those of Asian descent have been blamed and scapegoated for the outbreak of Covid-19 and as a result Asian Americans have been beaten, slashed, spat on and even set on fire and killed," Meng said.

The legislation would create a position at the Justice Department to expedite a review of COVID-19-related hate crimes; provide grants for states to create hotlines for reporting hate crimes and for law enforcement training aimed at preventing and identifying hate crimes; and direct federal agencies to work with community organizations to help raise awareness about hate crimes during the pandemic.

"The COVID-19 Hate Crimes Act will strengthen our defenses to prevent and combat anti-AAPI violence and will build on steps already taken by President Biden. Together these actions will make a significant difference in how we address hate crimes in America, not only during this pandemic, but for years to come," House Speaker Nancy Pelosi said Tuesday.

Reported hate crimes against Asian Americans in 16 of the nation's largest cities and counties have increased 164 percent since last year, showed a recent study by the Center for the Study of Hate and Extremism at California State University San Bernardino.

Separately, Stop AAPI Hate, a center tracking reports of racism and discrimination against Asian Americans, said it has received 6,603 firsthand complaints -- nearly two-thirds of them reported by women -- since last year, revealing the troubling spike in anti-Asian hatred during the pandemic while underscoring the need for urgent actions, including those from Congress.