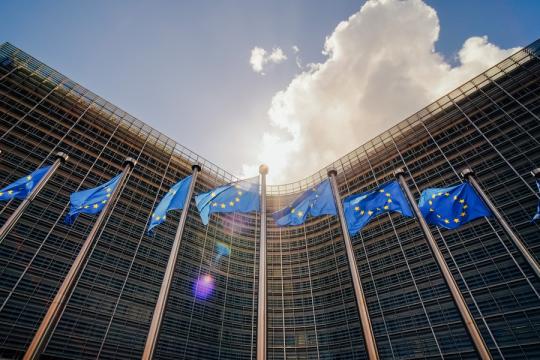 Flags of the EU fly in front of the headquarters of the European Commission in Brussels, Belgium, June 29, 2020. （Photo/Xinhua）

Premier Li Keqiang has called for concerted efforts from both China and the European Union to advance the signing of the bilateral investment agreement to make it take effect as soon as possible, saying China-EU cooperation is conducive to the global economic recovery.

Li made the call in a telephone conversation with his Italian counterpart Mario Draghi on Monday.

Both sides should work together to enhance pragmatic cooperation with openness, and strive to resolve their differences through dialogue and consultation on the basis of mutual respect, he said.

Li expressed hope that Italy, as an important EU member, could continue to play a positive role in promoting the healthy and stable development of China-EU ties.

In response, Draghi said the EU-China Comprehensive Agreement on Investment is an important consensus and Italy supports advancing the follow-up process through dialogue at an early date.

At the end of last year, China and the EU announced conclusion of negotiations on the bilateral investment agreement, which is expected to come into force after both parties complete their respective legal procedures.

In late March, the European Parliament decided to cancel a review meeting of the investment agreement over China's sanctions on some individuals and entities on the EU side who severely harmed China's sovereignty and interests and maliciously spread lies and disinformation.

China has said the investment agreement is mutually beneficial, and it is ready to communicate and coordinate with the EU on the early implementation of the deal for the benefit of both sides and the world.

On China-Italy relations, Li said both countries are comprehensive strategic partners and share deep historical bonds and a strong convergence of interests.

He mentioned the countries' joint fight against the COVID-19 pandemic, and said China is willing to work with Italy to promote bilateral cooperation in trade, investment, energy and climate change, expand cultural and people-to-people exchanges and strengthen collaboration within the framework of the Group of 20.