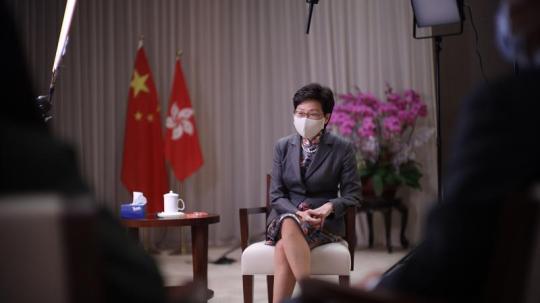 Chief Executive Carrie Lam Cheng Yuet-ngor said Wednesday that without a proper sense of national identity and national education among the public, many favorable policies for Hong Kong to integrate into the mainland will render useless and ineffective.

Hong Kong has benefited from a number of national and regional policies, Lam said, such as the Guangdong-Hong Kong-Macao Greater Bay Area and closer financial connectivity with the Chinese mainland. These policy supports will "go to waste" if Hong Kong residents lack a sense of national identity or do not support Hong Kong's integration into the overall development of the country.

She noted that Hong Kong is now on track to strengthen national education "on all fronts", starting with an increased emphasis in schools this year on elements related to the nation.

School education is one of the most important starting points for the government's campaign to strengthen national education, she said. For example, "the nation" will be one of the three themes of the core content of the curriculum of the Citizenship and Social Development study, a revised version of Liberal Studies to be launched in September. The other two themes of the course are "Hong Kong" and "the contemporary world".

Since February, the Education Bureau has issued several circulars to all primary and secondary schools in Hong Kong, giving detailed advice on national education from regular flag-raising ceremonies to including national security elements in the curriculum of at least eleven school subjects.