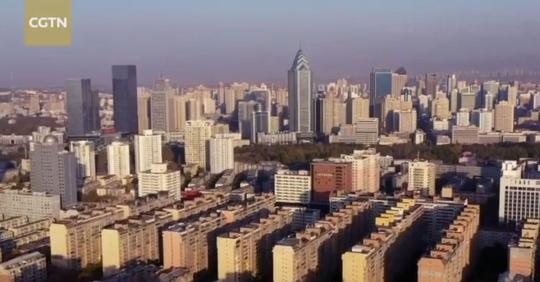 Screenshot from the documentary The War in the Shadows. (Photo/CGTN)

The Xinjiang Uygur autonomous region still faces grave challenges from terrorism and extremism so its measures to combat these scourges are necessary and never excessive as is claimed by some Western countries, said a spokesman for the regional government.

Although no terrorist incidents have taken place in the region that previously often faced by violent attacks for more than four years, it will continue to implement anti-terrorism and anti-extremism measures in accordance with the law, regional government spokesman Xu Guixiang said at a news conference in Urumqi on Tuesday.

Xu added that The War in the Shadows, a 55-minute documentary produced by China Global Television Network and broadcast on Friday, has revealed how some officials hidden in government bodies had backed the spread of extremism and terrorism in Xinjiang.

Furthermore, it has shown the damage these people caused as well as the reasons why removing them from their posts was a crucial part of the region's anti-terrorism and anti-extremism measures.

Shirzat, 54, was sentenced to death with a two-year reprieve for crimes including secession, defection to the enemy, illegally providing information to overseas bodies, participating in terrorist groups, assisting terrorist activities and sabotaging law enforcement in the name of extremism, Wang Langtao, vice-president of Xinjiang High People's Court, said at the news conference.

Shirzat had plotted separatist activities for a long time behind the mask of being a Communist Party of China member. He offered support and protection to separatists and religious extremists. He also accelerated the spread of religious extremism in Moyu and created a favorable environment for terrorist attacks, Wang said.

"For a lengthy period, Shirzat has served as the protective umbrella for the forces of separatism, extremism and terrorism in Moyu to achieve the goal of establishing an 'independent state'," Wang said.

In May 2003, Shirzat, who then served as the head of Moyu county Public Security Bureau, met Tayir Abbas, a key member of the East Turkestan Islamic Movement. The terrorist organization, also known as the Turkestan Islamic Party, aims to separate Xinjiang from China and build the independent state of "East Turkestan", according to a court document.

Shirzat promised to offer his support to the cause of "ethnic independence". In 2015, Shirzat was appointed as a candidate for leader of the future "independent state" by East Turkestan Islamic Movement for his "outstanding contribution" as he had provided financial support and terrorist-related intelligence to its branch in Egypt, the document added.

In the other case, Sattar Sawut, 73, the former chief education official in Xinjiang, was sentenced to death with a two-year reprieve for crimes of secession after being arrested on May 19, 2017, Wang said.

Since 2002, Sattar, who was also head of the Xinjiang Basic Education Curriculum Reform Group, saw the opportunity to groom "successors" by including content on "ethnic oppression" in textbooks. He also deliberately included editors harboring separatist views during the editing process, Wang said.

According to a police investigation, there were 84 articles containing materials related to ethnic separatism, terrorism and religious extremism in the 2003 and 2009 editions of Uygur-language textbooks that had been used in primary and middle schools across Xinjiang for more than 13 years. A number of people who carried out terrorist attacks and were involved in separatist activities were influenced by these textbooks.

Shirzat and Sattar chose not to appeal and pleaded guilty, Wang added.