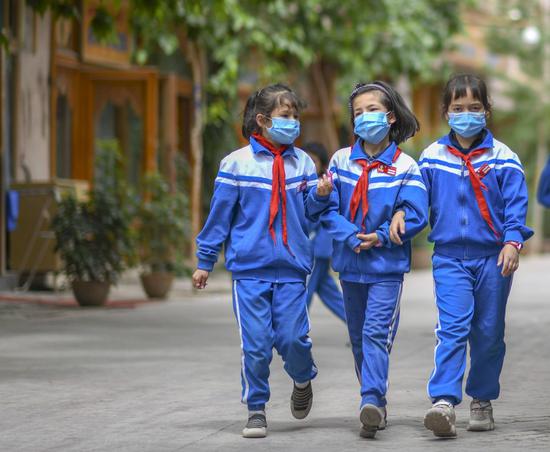 Children walk in a street after school at a scenic spot in the ancient city of Kashgar, northwest China's Xinjiang Uygur Autonomous Region, May 16, 2020. (Xinhua/Zhao Ge)

Authorities in northwest China's Xinjiang Uygur Autonomous Region on Tuesday revealed that they had busted a separatist criminal group in the educational sector.

The group's leader was Sattar Sawut, former director of the Xinjiang education department and former head of the region's leading group on basic-education curriculum reform. They incorporated ethnic separatism, violence, terrorism, and religious extremism content into minority-language textbooks. These books had been used for 13 years. It had grave consequences, said Wang Langtao, vice president of the Xinjiang regional higher people's court, at a press conference.

Sattar Sawut was sentenced to death with a two-year reprieve after being found guilty of crimes of separatism, taking bribes and several other crimes.

Sattar Sawut, born in November 1947 in Toksun County, Xinjiang, pleaded guilty to the crimes and did not file an appeal against the verdict.

Sattar Sawut took advantage of compiling and publishing ethnic language textbooks for primary and secondary schools to split the country, starting in 2002. He instructed others to pick several people with separatist thoughts to join the textbook compilation team, the court found.

The investigation also found that 84 texts preached ethnic separatism, violence, terrorism, and religious extremism in the 2003 and 2009 editions of the textbooks.

Under the influence of the textbooks, several people (already convicted) participated in terrorist attacks in Urumqi on July 5, 2009, and April 30, 2014, respectively, or became key members of a separatist group headed by former college teacher Ilham Tohti, the court found.