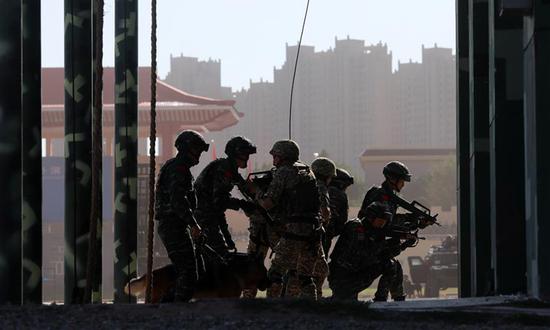 Court authorities of northwest China's Xinjiang Uygur Autonomous Region have revealed crimes committed by Shirzat Bawudun, a former government official who had conspired with a terrorist organization and carried out separatist activities under cover of his identity as an official.

Shirzat Bawudun, born in 1966 in Luopu County, Hotan Prefecture, was the former head of the public security bureau of Moyu County of Hotan and the former head of the Xinjiang regional department of justice, said Wang Langtao, vice president of the Higher People's Court of Xinjiang, at a press conference on Tuesday.

In May 2003, as head of the public security bureau of Moyu, he met with Tahir Abbas, a key member of ETIM, who came back to Moyu from abroad, plotting "national independence." Shirzat Bawudun also promised at the meeting that he would try his best to help.

Shirzat Bawudun also instigated others to join ETIM and provided 1.2 million yuan (about 183,230 U.S. dollars) and property obtained from his bribery to ETIM. He also carried out illegal religious activities at his daughter's wedding. He accepted bribes totaling 11.12 million yuan.

He also committed crimes including defecting to the enemy, illegally providing information to foreign forces, participating in a terrorist group, and aiding terrorist activities. He also used extremism to undermine law enforcement, gathered crowds to disturb the social order, took bribes, and abused his power, the court said.

Shirzat Bawudun was sentenced to death with a two-year reprieve, deprived of his political rights for life, and stripped of all personal property.

He pleaded guilty and did not appeal.