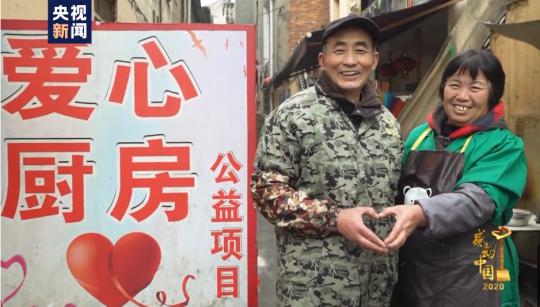 An elderly couple who has been providing free kitchen services to families of cancer patients for nearly 20 years has been honored as "People Who Moved China in 2020" for their kindheartedness.

Wan Zuocheng and his wife Xiong Gengxiang ran a restaurant near a cancer hospital in Nanchang, the capital of East China's Jiangxi province, since 1993. They later set up a breakfast stall in the alleyway after the restaurant was demolished in a road renovation program.

In 2003, a woman whose child was receiving treatment for bone cancer in the nearby Jiangxi Cancer Hospital went to their stall, asking to borrow their stove to cook food. She said her kid wanted to eat food cooked by her.

Feeling sympathetic to the family's suffering, Wan did not hesitate to agree to her request.

Since then, more and more families of patients began coming to their stall to cook.

The couple generously allowed people to use their cooking utensils and condiments free of charge. To meet the growing demand, they later added more stoves and cooking utensils to their stall.

Their generosity came with a price – the expenditure on water, electricity and coal multiplied over years. With the costs rising, those who borrowed their stoves started paying to the couple. However, the couple only accepted a minimal fee of 0.5 yuan (7 cents) for each dish cooked, and rose it to 1 yuan in 2016, which is barely enough to cover the costs.

The couple's income mainly comes from selling fried dough stick, a popular breakfast snack, and Xiong said they never wanted to profit from lending their stoves and cooking utensils to patients.

Every day, Wan Zuocheng gets up before 5 am, and ignites the stoves and boils hot water, making everything ready for people who will come to the "cancer kitchen". And at noon, when the last kitchen user leaves, the couple cleans the cooking utensils and the stall.