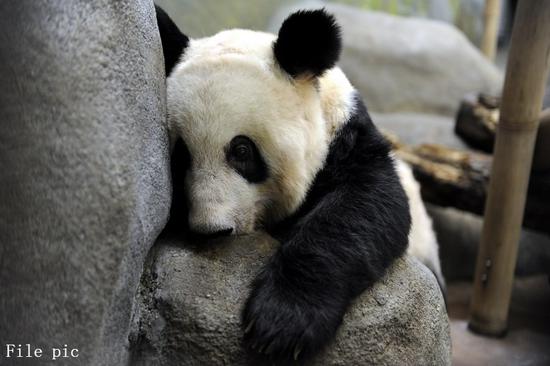 Chinese giant panda Ya Ya drinks in its enclosure at the Memphis Zoo in Memphis, Tennessee, the United States, Aug. 13, 2010. (Xinhua/Jiang Guopeng)

The Memphis Zoo of U.S. state Tennessee said Thursday that two giant pandas living in its facility are "healthy" amid emerging concern over their conditions.

In a statement to Xinhua, Memphis Zoo said the veterinary records and diagnostic testing show that female giant panda Ya Ya and her male partner Le Le are "healthy animals," and Ya Ya "does not have any underlying medical or malnutrition issues."

"She has always had a body conformation and seasonal hair thinning atypical of the public expectation of a large, plump, fluffy, full faced giant panda," the statement said of Ya Ya, who "has a great personality and interacts happily with her mate Lele, zoo staff, and guests."

The Memphis Zoo said the statement came after a representative from the Association of Zoos and Aquariums, which accredits facilities in the several countries and regions, evaluated photographs and videos of the bears, interviewed veterinary, behavioral, and nutritional staff members from zoo, and read through the panda bears' medical history for a review.

The representative also consulted with giant panda experts and compared the data collected with the concerns submitted, according to the statement.

Allegations are emerging on some Chinese social media platforms that Ya Ya and Le Le, both in their 20s, appear to be not doing well in the Memphis Zoo, citing their looks and behaviors.

The pair of giant pandas came to the Memphis Zoo in 2003 as part of a long-term lease with China, which was renewed for another ten years in 2013.

The Memphis Zoo, which will reopen on Saturday with limited admission after closing to the public during the COVID-19 pandemic, is one of the only three zoos in the United States to house giant pandas, one of the world's most recognized species and a symbol for conservation.