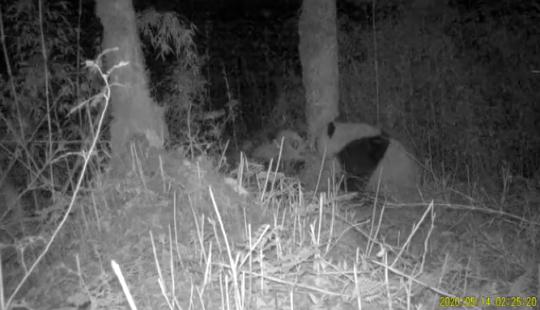 While going over recent information collected by the reserve's infrared cameras, the staff at the Gansu Baishuijiang National Nature Reserve observed a pair of wild pandas meeting and kissing at midnight.

The loving caress was recorded in a three-second video shot on May 14, 2020, in which the pandas were sitting under a tree looking into each other's eyes when one leaned over to give the other a kiss.

"It is difficult to tell their sexes from mere pictures, but we believe the pair is a couple, as pandas are usually solitary creatures," said He Liwen, director with the giant panda administration of the reserve. He added that their respective sizes point to the fact that they are a couple rather than a mother and cub.

The mating season for wild pandas usually lasts from March to May every year, and most of the species' interactions are made in the form of scent marking in their habitats, according to He.

When two adult pandas show up together without fighting as the video footage has recorded, they are likely to be a mating couple, He added.

Even though the duo found a secluded spot in the forest to enjoy their midnight date, the reserve's infrared cameras were still able to capture the sweet moment. More than 200 infrared cameras have been set up in the reserve to monitor the living conditions of the rare wildlife.

In October 2019, a dynamic spatial data monitoring system for the giant panda habitat was established in the reserve with multiple video monitoring spots built. Staff can now observe the forest through real-time images transmitted from the monitoring spots to better protect the wildlife.

Located in the southern part of Gansu, the Baishuijiang reserve covers around 180,000 hectares and is home to many rare animal species, including giant pandas, golden snub-nosed monkeys and takins.

"In recent years, with the steady progress of conservation, the ecological environment of the reserve has been improving, and giant pandas have been increasingly photographed in the wild," said He, adding that wild panda couples, which have only been captured once a few years ago, now can be spotted several times a year.