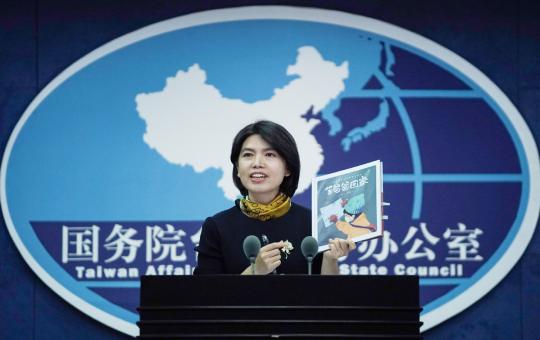 Zhu Fenglian, a spokeswoman for the State Council Taiwan Affairs Office, speaks at a news conference in Beijing on Dec 16, 2020. (Photo/Xinhua)

There is no way to talk about any dialogue if the Taiwan authorities refuse to recognize the 1992 Consensus, which embodies the one-China principle, Zhu Fenglian, a spokeswoman for the Taiwan Affairs Office of the State Council, said on Wednesday.

Zhu made the remark at a news conference when responding to some recent media reports that said the Taiwan authorities attacked the mainland on issues related to Hong Kong and the Xinjiang Uygur autonomous region during a video conference with a US think tank, but at the same time called for "pragmatic communication".

Zhu said the root cause of the current tension across the Straits lies in the fact that the Democratic Progressive Party, the ruling party on the island, fails to recognize the 1992 Consensus. Such a move unilaterally destroys the common political basis for cross-Straits dialogue and consultation, she added.

The Taiwan authorities have recently been talking about "reconciliation" and "dialogue" across the Straits, but in reality they have further collaborated with external forces, ignored facts and maliciously attacked the mainland and created confrontation. Such actions completely contradict so-called reconciliation and dialogue, she said.

She also noted that the Taiwan question is China's internal affair and the two sides across the Taiwan Straits are one family. Chinese people on both sides have the wisdom and ability to solve their own problems.

However, if the Taiwan authorities deny the 1992 Consensus and deviate from the one-China principle, there is no way to start talking about interaction and dialogue, she said, adding that only when the Taiwan authorities return to the right track and stop seeking "independence" and provocations can cross-Straits relations improve and develop.

In response to some experts' remarks that the mainland should use military force to exert pressure on Taiwan, Zhu said the central government has spared no efforts to resolve the Taiwan question and promote peaceful reunification and "one country, two systems", which are the best ways to achieve national reunification.

These policies serve the fundamental interests of the Chinese nation, fully take into account the situation of Taiwan, respect the differences between the two sides and safeguard the well-being of our compatriots, she said.