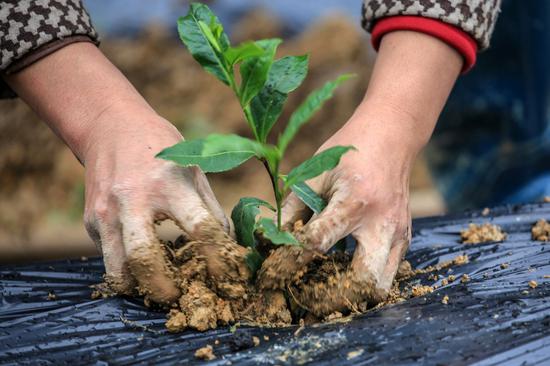 A villager plants a tea seedling on a newly-opened 40-hectare tea plantation in Xiaojiaping Village of Longshan County in Tujia and Miao Autonomous Prefecture of Xiangxi, central China's Hunan Province, Dec. 3, 2018. The village makes full use of the selenium-rich soil and adopts a poverty reduction mode in which companies and farmers build a partnership to develop tea planting. (Xinhua/Zeng Xianghui)

Chinese President Xi Jinping has sent a letter of congratulations to the International Forum on Sharing Poverty Reduction Experience, which opened on Monday in Beijing.

Calling poverty eradication "a common ideal of humanity," Xi said that the Communist Party of China (CPC) and the Chinese government made unremitting and arduous efforts to ensure a better life for the people.

Since 2012, China has launched a full-scale battle against poverty, based on its previous poverty alleviation efforts, Xi said.

After eight years of continuous efforts, China has lifted all the rural poor under the current income standard out of poverty and removed all impoverished counties from its poverty list.

With nearly 100 million poor people in rural areas lifted out of poverty, China has made significant contributions to the global poverty reduction cause, Xi said.

The country will continue to consolidate and expand the achievements of poverty alleviation, make notable progress in prosperity for all, and continuously improve the well-being of people's livelihood, he said.

Xi also stressed that the cause of poverty reduction is facing severe challenges as the COVID-19 pandemic is raging across the world.

China is willing to work with all countries to promote international poverty reduction and build a community with a shared future for humanity, he said.

Xi said he hoped that participants of the forum could conduct in-depth communications on poverty reduction experiences, reach broad consensus, and build up more confidence to accelerate the process of international poverty reduction.

He said Xi's letter expounded the historical process, great achievements and international contribution of the efforts made by the CPC and the Chinese government in poverty alleviation.

It demonstrated China's unswerving determination in responding to challenges brought by the pandemic with the world, in jointly promoting poverty alleviation and building a community with a shared future for humanity, he said.

Jointly held by the Publicity Department of the CPC Central Committee and the State Council Leading Group Office of Poverty Alleviation and Development, the forum was attended by over 200 representatives from more than 60 countries and regions, as well as over 20 international organizations via video.