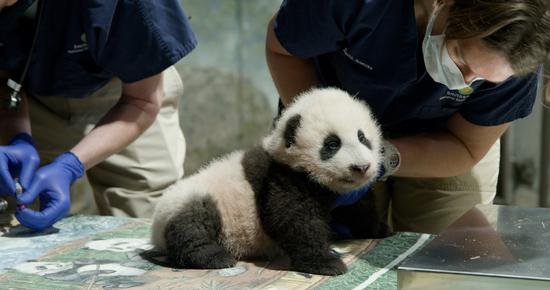 The "big milestone" occurred on Thanksgiving, which fell on Nov. 26, when the male cub was three months and five days old, Laurie Thompson, the National Zoo's assistant curator of giant pandas, wrote in an update published on Friday.

"That morning, he rested just outside the den while his mother Mei Xiang slept inside," Thompson observed. "After months of practice, he positioned all four feet beneath him and took a few wobbly steps toward her before toppling over."

Xiao Qi Ji has been seen practicing his walking skills from time to time in the mornings since then, when Mei Xiang brings him from the den into their large indoor enclosures, the assistant curator added.

From the tip of his nose to the base of his tail, he measured 65 centimeters and his abdominal girth reached 49 centimeters.

Xiao Qi Ji was born on Aug. 21 to mother Mei Xiang and father Tian Tian, who's also living in the Washington, D.C. zoo.

The birth of Xiao Qi Ji, which literally means "little miracle" in English, "offered the world a much-needed moment of joy amidst the COVID-19 pandemic," the National Zoo said in a release late last month when announcing his name.

"His name reflects the extraordinary circumstances under which he was born and celebrates the collaboration between colleagues who strive to conserve this species," the release stressed.

The Smithsonian's National Zoo, part of the Smithsonian Institution, a renowned U.S. museum and research complex, has had a cooperative breeding agreement with the China Wildlife Conservation Association.

Due to the pandemic, the U.S. zoo is temporarily closed to the public. Enditem