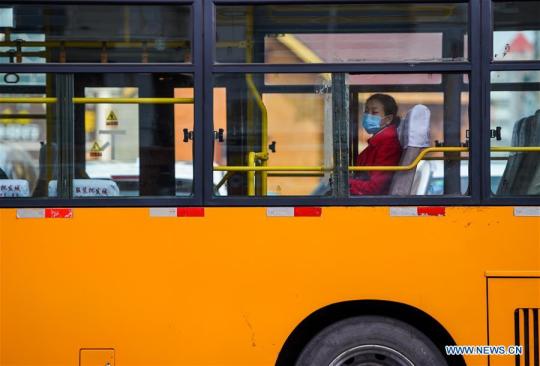 A passenger wearing mask is seen on a bus in the China-Russia border city of Manzhouli in North China's Inner Mongolia autonomous region, on April 14, 2020. (Photo/Xinhua)

The coronavirus clusters that have sprung up in communities in Manzhouli in the Inner Mongolia autonomous region, have been identified as being triggered by imported infection based on the latest research on the virus' origins, the local government said.

The genetic sequencing on the first two confirmed cases reported in the city on Saturday, a middle-aged couple, showed that their type of the novel coronavirus belonged to Branch I of the European L genotype, and the following comparison showed it was highly similar to the strain that spread in Russia, said Wang Wenrui, director of the Inner Mongolia autonomous region disease control and prevention center, on Thursday.

"It indicated that the latest outbreak in the city was triggered by imported coronavirus infections," Wang said, adding that investigations on other confirmed cases will also be conducted.

The city reported nine new confirmed cases of COVID-19 on Thursday, increasing the tally to 11. It also reported another asymptomatic case and a suspected case, according to the city's health authority.

"Among the universal screening of the 203,326 residents in the city starting from Sunday to Wednesday, we found 10 positive cases," Guo Xiaofang, deputy mayor of Manzhouli, said at a news conference on Thursday.

"Among them, there are family members, classmates, teachers and neighbors in the same residential communities, from ages 10 to 62," said Wang Hongquan, director of the Manzhouli disease control and prevention center. "The cases have obvious characteristics of cluster infections."

After the outbreak, Manzhouli has adopted strict measures to control the spread, including locking down six residential communities in two medium-risk areas for COVID-19 since Saturday evening, and conducting strict inspections on vehicles and travelers in and out of the city, according to the government.

Several flights between Manzhouli and other cities, including Beijing, Tianjin, Harbin and Hohhot, have been canceled, Manzhouli Xijiao Airport announced on Saturday. Bus and railway services for passengers were suspended to keep people from gathering and spreading the coronavirus.

In addition to the strict measures adopted in Manzhouli due to the recent outbreak, other cities have tightened regular management especially regarding cold-chain food, which has been considered the virus source of the recent outbreak in Tianjin.

In Beijing, Xinfadi wholesale market, which supplies more than 80 percent of the capital's agricultural produce, has disposed of all of its cold-chain food including seafood and frozen meat, local media reported on Wednesday.

According to staff at the market, it will strengthen the management of its cold storage to ensure safety under the current COVID-19 epidemic condition.

Large-scale nucleic acid testing will be carried out for all workers in the cold-chain food industry as well as those who live with them, said officials at a conference on Wednesday.