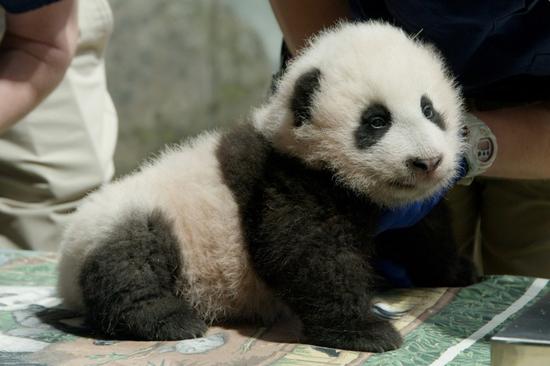 "Xiao Qi Ji," which translates into English as "little miracle," is the name given to the giant panda cub born three months ago in Washington, D.C., the zoo where he was born announced Monday.

The name emerged from altogether four Mandarin Chinese names after the Smithsonian's National Zoo and Conservation Biology Institute invited the public to vote online between Nov. 16 and Nov. 20. Nearly 135,000 votes were received during the five-day period, the zoo said in a press release.

"Watching Xiao Qi Ji always puts a smile on my face," said Steve Monfort, John and Adrienne Mars Director of the Smithsonian's National Zoo and Conservation Biology Institute. "We are grateful that those who share in our joy have helped us pick the perfect name for our panda cub."

Xiao Qi Ji was born on Aug. 21 to mother Mei Xiang and father Tian Tian. His birth was streamed live on the zoo's Giant Panda Cam, through which more than 1.5 million virtual visitors have since tuned in to watch him grow, according to the zoo.

Giant pandas, the zoo said, "are an international symbol of endangered wildlife and hope," adding that "Xiao Qi Ji's birth offered the world a much-needed moment of joy amidst the COVID-19 pandemic."

All panda cubs born at the zoo will move to China when they are four years old, as is part of an agreement between the zoo and the China Wildlife Conservation Association. The agreement expires in December, and the two sides are discussing the arrangement of the giant pandas beyond that point, the release said.