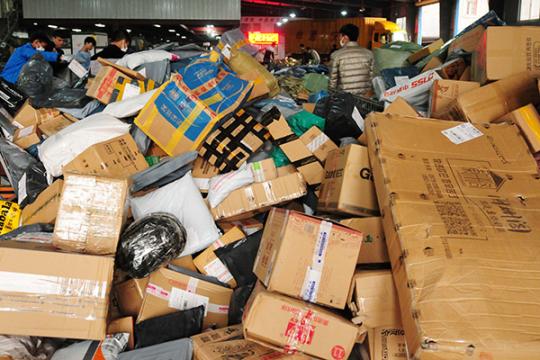 Yet the huge amounts of packaging waste caused by the booming delivery services have raised concerns over environmental impact.

According to a new survey over green delivery packaging, nearly 70 percent of respondents said they had never used or received recyclable packaging.

The report said only three delivery companies, SF Express, JD Logistics and Suning Logistics, have published the amount of packaging they recycled.

For example, JD said it had recycled 5.4 million packaging boxes since 2017 when it launched a campaign to reduce packaging waste.

Using reusable packaging is an important way to cut packaging waste from the source, said the report. But only four out of the nine enterprises surveyed have put recyclable boxes into use or trial use.

In terms of the types of packaging recycled, the courier enterprises mainly recycle cartons whereas plastic packaging has not been included in their recycling programs.

The report said some of the enterprises have been promoting the use of degradable plastic wrappings or fillers. But due to the lack of a sound standard system for biodegradable materials, a question mark hangs over whether the materials should be regarded as an environmentally friendly solution for reducing packaging waste, according to the report.

Courier companies should set quantifiable goals on the reduction of packaging waste and publish results regularly, said the report. It also urged the delivery sector to reduce the use of packaging from the source and avoid using disposable packaging.

E-commerce accounts for over 80 percent of China's delivery services, and thus online e-business platforms should play a leading role in promoting green packaging in the courier sector, said the report.

According to estimates made by the State Administration for Market Regulation, more than 9 million tons of paper waste and about 1.8 million tons of plastic waste are generated by the delivery sector every year.

Statistics from the State Post Bureau suggest that delivery packaging waste accounted for 93 percent of the increase in household waste in China's megacities in the first half of 2018.

In June, the State Post Bureau released a guideline to regulate green packaging. The guideline calls for using recycled and lighter materials. It also urges enterprises to set up recycling bins at delivery stations for wrapping.

According to a report published by the development and research center of the State Post Bureau last month, a total of 200 million wrapping boxes were recycled in the postal and courier sector in 2019 and around 2 million recyclable boxes have been put into use.